A Search for the Roots of the Blues 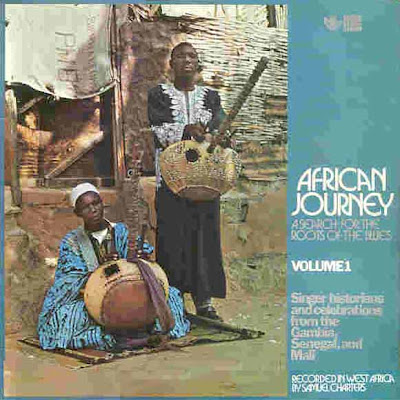 Quite frankly I don't care where the roots of the blues are (although I have my suspicions). For me its the journey, travel, searching, stories and discoveries along the way that make a musical obsession worthwhile. And with music this good the academic stuff is all filler. The out of print LPs made available today by "op" are featured as "Classic African Recordings" on Graeme Counsel's website. He has this to say:
In the early 1970s Samuel Charters travelled to West Africa in order to trace the influences of the indigenous musical styles on the blues of the USA, especially the "pre-war" blues style of the 1920s
and 1930s. He recorded musicians in Ghana, The Gambia and Senegal, focusing on the music of the professional musicians - the griots. The LP recordings feature two kora tracks by Jali Nyama Suso, plus other songs performed by griots on the balafon and xalam. In addition there are also some superb shaped-note hymns and choral pieces performed by a Ghanaian choir, as well as recordings of street celebrations, Ewe drumming, a Jola dance, plus great liner notes and photographs. Originally released through Sonet, it is a pity that these albums have never been re-released on CD, for they form part of an invaluable resource on early recordings of griot music. Charters also published a book which described his trip through West Africa in detail - The Roots of the Blues. London: Quartet Books. 1982. 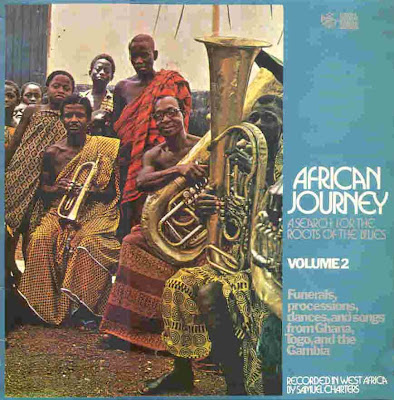 Hey, matsuli, my friend Tim Clifford told me that you had digitised copies of these records. Great to have them to hear! Sam's book, 'The roots of the Blues' is actually dedicated to me and my mother!

A pal gave me a digitised version of the What's Going On mutitrack, so I isolated the bass drums and congas - classic James Jamerson!

quite simply beautiful!
..many thanks ;)

I have this African journey lp (volume 2) and it's a great post. Did you post Volume one too? It didn't download for me. Just curious if it was posted.

Keep up the great work!