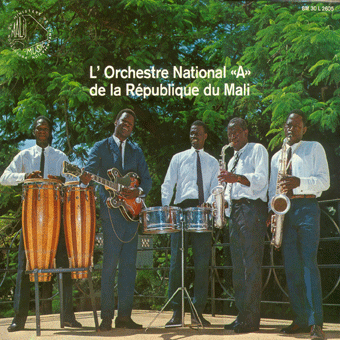 My journey back to vinyl was kickstarted whilst living in Sydney during 1999-2004. I met Tony aka Muvimi, compiler of Harare Hits and was blown away by his African music selection that he had pieced together at stores in Melbourne, Sydney and during his travels in Zimbabwe and further afield. This led to regular visits to Red Eye Records, Egg Records and to the Glebe Record Fair. On the first few visits to the fair there were bits and pieces but on the last journey I came across a table and a box of records that were packed with rare, high quality LPs. I did a quick flip through and pulled out the two LPs I'm sharing today. There were a whole lot more that I ould have loved to buy but the seller knew what he was selling and there were no real bargains. For me just finding these records was more than I expected.

Graeme Counsel at the Radio Africa website has this to say about the L'Orchestre National "A" de la République du Mali LP:
"Modibo Keita was Mali's first President, ruling the nation from 1960 to 1968. Inspired by Guinea's Sékou Touré, his government enacted a radical cultural policy which saw the formation of regional and national orchestras. L'Orchestre National "A" de la République du Mali were the first of these bands, and were formed the day after Mali's independence. In accordance with the cultural policies of the new government, the orchestra consisted of "musicians sworn to serve their country by contributing with all their genius to the protection and revalorization of Malian musical art". The orchestra contained some of the best musicians in the land, though not all could fit into one band, hence the existence in later years of the National "B" and "C" orchestras. The National "A" orchestra was led by Keletigui Diabaté, a multi-instrumentalist who played lead guitar in the group. The connection between Guinean and Malian cultural policy is enshrined in the group, for Keletigui was a former member of Guinea's Orchestré de la Garde Républicaine (Première Formation). The National "A' Orchestra's only LP (pictured above) was released in circa 1970 on the Bärenreiter-Musicaphon label. It contains two songs from the epic narrative tradition of the griots, "Taara" and "Duga", the latter on par with the best performances recorded in Mali. The exceptional number on the LP, however, is "Janfa", a song concerning a lover's betrayal (also performed by the Tjiwarra Band, among others). It's a superb number with a mesmerizing guitar solo by Keletigui Diabaté, and it was surely an inspiration for many of the nation's musicians. It's criminal that this LP, along with the other Bärenreiter's, has never been re-released."
25 Downloads ONLY 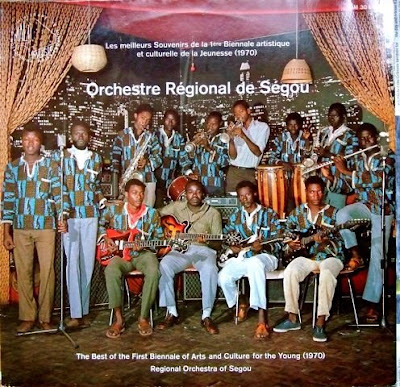 The second LP comes from the Orchestre Regional de Segou and was also originally released in 1970 on the Bärenreiter-Musicaphon label. The band later morphed into Super Biton de Segou.
25 Downloads ONLY 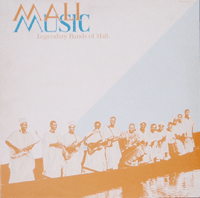 So enjoy this limited access to these treasures and ask Sterns to reissue that compilation.
at 2:42 PM

The more searched of Malian music bands for me last years is the Orchestre Régional de Mopti
but this two presents are the best of the 2008.
Thanks you very much.¡¡¡
Ngoni.

thanks Matt - the Brownout shoutout was also worth the download on e-music ... Sterns, are you following this site ... herewith one customer for the Mali re-issue - chris a s africa

I agree - criminal that none of these have been released. I think maybe one or two from the series (there were six bands/lps I think?) have turned up on ebay in the last 3 years, each time going for more that $100 US.

Wow Matt, i don't check the website for a day and i miss these gems. (links are already dead)Any chance you can repost these....25 downloads is very limited and now i'm starting my dad feeling very sad....

Before I could implement the 25 downloads limit a total of 63 downloads had been completed. please pressure Sterns to re-issue this series. Matt

I'm not going to hold my breath waiting for sterns to reissue these but it would be a very good idea. They've certainly done some great reissues in the past year. Here's hoping that you'll repost these in the meantime so more people can hear this beautiful music.

Well it appears that a limited issue of 1000 vinyl copies of Orchestre Regional De Kayes is being put out shortly by the Mississippi label. Heres the hype:

"Originally released in 1968, the Orchestre Regional De Kayes recorded this as part of a series produced by the Mali government called "Best Of The Biennial Of Art & Culture For The young". This standout LP features beautiful lilting guitar playing, strong vocals, and an incredibly tight band modernizing African folk tales into pop music. Includes the hit song "Sanjima".
LP - MR018 - expected soon
Cover is printed in the old fashioned 'tip on' style. Limited edition of 1000.

Thats great news on orchestre regional de kayes, always wanted to hear that. The Mississippi label did a nice job with Philip Cohran. But this won't help people hear the other records!

how did i miss this? This albums look so great.

Any chance for a repost, Matt?

A pity I missed this gem! In the early 80's, I stumbled upon a vinyl by "L'Orchestre Kanaga de Mopti'. The LP is alas long lost and unavailable, but through it I dicovered West African music and specially the so called 'desert blues' to which I'm (a bit) addicted. Thanks anyway.

I really need to ckeck this blog more regularly I always miss the best bits...

please put these up again, just for a little while

Yes, please if you can post a little bit more. Too sweet to miss...

I just saw Orchestre Regional de Kayes lp listed on the Honest Jon's website, but I have real issues with Mississippi records. Are they PAYING any ROYALTIES? I am sure the guys in the band (who are alive) probably don't have a lot of cash.

I just bought "Lipa Kodi Ya City Council" on EBAY and was surprised that of the rare and hard to find songs, 6 of the 12 were "pirated" from old Original Music records of which I have copies. I suspect several of the other songs were from OM records I don't have.

I am not sure what bothers me more. The people at Mississippi not paying royalties or their pretending they are such great artistes... Hell I could rip song tracks off obscure albums and make arty covers, but would I really be any different from the lady selling pirated Nigerian music were I buy coco-yams?

Chris..I think you might just be right, all my efforts to identify Mississippi have come to naught.....so as a treat here's a short report of Orch A
http://www.sendspace.com/file/7m9ide

Many thanks for the repeated gesture and the sweet fruits!

Thanks!!!
Really nice to hear it at last.

Thanks for the clarification Graeme. I have purchased a copy of the Mississippi LP and it has been lifted directly from a vinyl copy with no clean-up. Even the cover and labels are straight copies. Its a real pity that the only way to aquire this music is via such bootlegs, being part of a CDr sharing network or by paying unreal prices on EBay. Mississippi are plain wrong in what they are doing. I hope that these LPs can be made available - even via limited release - whereby the originators get their due (monetary or otherwise). Unfortunately its a big bad world and unless artists are vigilant about their works bootlegging can easily happen where access is so restricted.

Prior to my purchase of the LP:
To reputable record shop:
"Do you know anything more about the guys behind Mississippi Records? Specifically regarding how they licensed this Orch Regional De Kayes? (If at all)
Matt"
Record shop:
"Sorry no idea Matt"

Hi-wonderful post of South African 78's today. A real treat to hear. Still a little sad that i missed this limited link and you even reupped it and i missed it again! Why the limited downloads, Matt? (I love Matsuli and i check everyday). I do think Mississippi are just bootlegging records. My copy of the Orchestre Regional De Kayes doesn't sound too great, especially the first track on the second side. I think it really sucks that the musicians aren't getting paid, and Mississippi should remedy this but i somehow they're doing much more than breaking even or making enough to fund their next project. Most of their blues lps the musicians are long gone, it may even be publaic domain material now. I'm an artist and writer, so i agree that musicians should be paid for their work. But i still feel super lucky that i was able to hear this music i wouldn't otherwise been able to. Is that bad?

While it sucks that Mississippi is not paying royalties to the musicians, we are still extremely fortunate to have the Kayes lp to hear again. I really think the profit margin for these records is rather slim. If you read the Analog Africa blog their beautifully researched and compiled Green Arrows Comp only sold 800 copies in all of Europe! The NY times article on Sterns said they've sold 9000 copies of the Tabu Ley 'Voice of Lightness". They needed to sell 6000 copies of which to break even. My point being that this is still a labor of love, for the music if you will. I don't think Mississippi is making alot of money on these things. Much of which is probably used for making another record. We all know the music business is a totally shady business anyway, just ask any Jamaican artist how much they've been paid for their work. This certainly doesn't justify it or make it right, but i think this is an age old problem. Hopefully the interest in Kayes will increase due to this bootleg, and maybe in the future we can look forward to a legitimate re-release with bonus tracks ala Orchestre Baobab's Pirate's Choice. (That was a bootleg to at one point, right?) I'd gladly buy it again, just as i buy music that i find on blogs when i find a physical copy. The Kayes lp totally smokes.

Is anyone who was lucky enough to download these willing to share or to re-up the link somewhere else? I'm willing to do a trade! Somehow i missed this and the short repost....thanks. And Graeme, i've been buying all the Sterns Syliphone reissues and they are STUNNING. Thank you.

How can i get copies of these cds? The download version with file extension .r does not work on my computer. Could i buy some original copy? If so, tell me how.
Dotoum

Mississippi has apparently liscensing 6 mali lps from Sterns correcting the problem of the first reissue they did which was a bootleg. Orchestre regional de mopti is the first available now....