Maybe God himself is lost 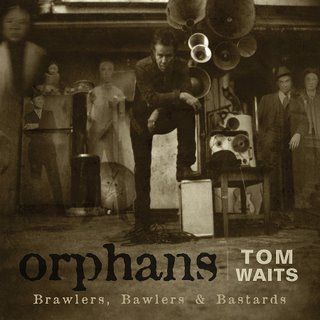 Tom Waits returns in November with an epic three-CD collection entitled Orphans: Brawlers, Bawlers and Bastards. Today I'm giving you three tracks to sample and get excited about. Here's Tom explaining the songs:

Kathleen and I wanted the record to be like emptying our pockets on the table after an evening of gambling, burglary, and cow tipping. We enjoy strange couplings, that’s how we got together. We wanted Orphans to be like a shortwave radio show where the past is sequenced with the future, consisting of things you find on the ground, in this world and no world, or maybe the next world. Whatever you imagine that to be.

If a record really works at all, it should be made like a homemade doll with tinsel for hair and seashells for ears stuffed with candy and money. Or like a good woman’s purse with a Swiss army knife and a snake bite kit.

Orphans contains songs for all occasions. Some of the songs were written in turmoil and recorded at night in a moving car, others were written in hotel rooms and recorded in Hollywood during big conflamas. That’s when conflict weds drama. At any rate these are the ones that survived the flood and were rescued from the branches of trees after the water’s retreat.

Full release details at the ANTI site.
at 9:24 AM