In April 2007 right at the start of this blog I posted a number of compilations in what was then the African Serenades series. This ran over 50 volumes and has had a lot of positive feedback. Whilst I promised to reload these from time to time it seems I am always distracted by other things. I have at least three half finished posts waiting to go but in the meantime I've very happy to say that Ken Abrams, who contributed Number 48 of the African Serenades series (Cuba to Africa) has contributed a new compilation and post today celebrating International Women's Month. You can view some of his artworks a this site.

"As I mentioned in my earlier letter, I've been thinking in compiling a disc of songs by all females in honor of International Women's Month. Originally, I wanted to focus on both French Antillean and African singers, but the month flew by quickly, so, only an African compilation was completed. All of the songs are culled from vinyl, most of which, I have not seen on CD. Like most men, I suppose, I adore the female voice and unfortunately, lead female singers are not common enough in African pop. Therefore, this post is also intended to showcase great African women vocalists that are not as well known, in the West, as Mariam, M'Belia, Angelique, and M'pongo. I tried not to duplicate any of the songs or artists that were featured on the 2 disc African Divas compilation that was part of the African Serenade series, posted years ago. In a way, this volume can be seen as a continuation of those two volumes. Though not as expansive, lacking any vocalists from Ethiopia and the Northern Africa, it reflects what I have in my collection and my musical tastes. Because I limited the collection to 80 minutes, many excellent songs by singers such as Barbara Akabla, Chantal Taiba, Faya Tess, Jolie Detta, Yta Jourias, N. Lauretta, GG Leopoldine, and Martha Zambo were left out. Vinyls were Ripped as .aiff using Peak Pro and Audacity on my Mac and ripped @ 320 vbr from Itunes. I will like to thank musical aficionado, Professor Kofi Kissi Domprey for his generosity. He hosts an excellent program of African music from 12 AM to 2 AM Sunday mornings on wpfw.org." - Ken Abrams 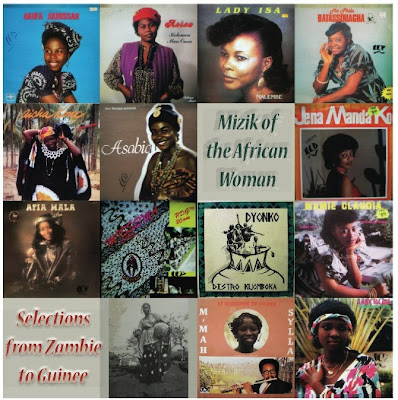 Thank you Matt and thank you Ken. Many wonderful familiar names here and many more new delights to discover. Much appreciated.

fantastic Matt and Ken - Thank you

Looking forward to this. Many thanks to Ken for assembling it and to Matt for maing it available.

Thanks again and again Matt and Ken. Am especially enjoying zomvera and the closing song from syliphone

So happy to discover your site today! I'm just sorry I've missed out on all the previous Serenades compilations. Hope you will repost a few someday. Anyhow, thank you so much. We women like fantastic female singers too, of course!

any chance of hearing more from the
Akofa Akoussah LP?
thanks