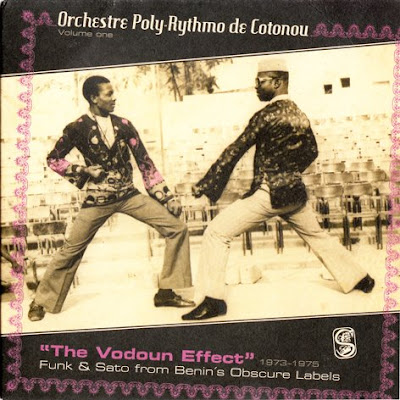 I was lucky enough to catch up with Analog Africa label boss Samy earlier this summer at Cargo in London for the Soul Jazz Orchestra gig. He had just spend a few days and a bunch of cash getting the tracks for this new Orchestre Poly-Rythmo long player cleaned up. His enthusiasm for all things Poly-Rythmo was clearly evident when talking about the band... "West Africa's best kept secret." And so the next installment from Analog Africa hits our shelves on 27 October. As a taste check out this video of the band with a track from the label's previous release African Scream Contest:

Higher quality here
The music has an urgency of expression led primarily by the vocalists with punctuation from the guitars and organ solos built on the bed-rock funk inspired rhythm. Great selection (from over 500 tunes) and sequencing. After just a few listens to the whole disc the following tracks are early stand-outs: Dis Mois La Verité, Iya Me Dji Ki Bi Ni and Kourougninde Wendé which bears an uncanny resemblance to the JBs' Gimme Some More. 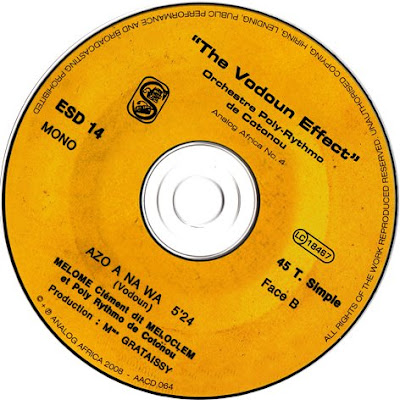 As a treat you can listen to the following mystery track which is hidden on the CD:
LIMITED SAMPLE
And this is just Volume 1. So hats off once more to Samy and his untiring efforts to preserve this extraordinary music.
at 6:58 PM

Thank you for the fantastic new tune from Poly-rythmo. I have beeen writing a documentary about them. I hope to shoot it in 2009...

Many Thanks for the news ! Analog Africa casse la baraque !!

it feels so good. I am very impatient.

Absolutely a must-have ! The Volume 2 "Echos Hypnotiques" will be almost better if possible .
For more informations, videos , photos , the complete discography of Poly-Rythmo : >jammagica.blogspot.com<