Blue Notes for You 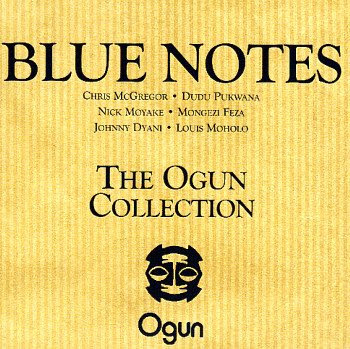 At long last Cadillac Records have completed the long promised 5-CD retrospective of South Africa's most important Jazz group The Blue Notes. Check your local stores or order on-line from Dusty Groove or Cadillac Records directly. The set includes the Blue Notes Legacy, a live date in South Africa from 1964; Blue Notes For Mongezi, a double-length set recorded after the passing of group trumpeter Mongezi Feza; Blue Notes For Johnny, a date recorded after the passing of bassist Johnny Dyani; and Blue Notes In Concert, a great live date recorded in 1977. For more on the Blue Notes check WIKI. The group have also been awarded South Africa's highest award The Order of Ikhamanga. More here. 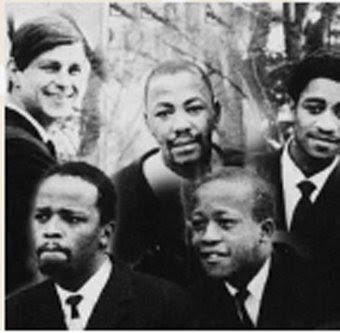 A very early picture of the Blue Notes: Chris McGregor, Dudu Pukwana, Louis Moholo, Johnny Dyani and Mongezi Feza. As Dusty Groove say: "A long-overdue look at one of the most important groups to grace the British jazz scene of the 60s and 70s -- the legendary Blue Notes, a group of South African expatriates with an undeniably huge influence on the music of their new homeland! The ensemble featured key players who went onto do some amazing work on their own, but first came together in this group -- trumpeter Mongezi Feza, saxophonist Dudu Pukwana, pianist Chris McGregor, bassist Johnny Dyani, and drummer Louis Moholo -- all players as dynamic together and important on their own as the members of the Art Emsemble of Chicago from the US."

For exploration check out this live concert from Chris McGregor's Brotherhood of Breath - an excerpt from a concert inside Balver Höhle in Germany in 1972.
at 9:45 AM

It's great to hear that this is finally out! All the Blue notes stuff is worth hearing, and Dudu pukwana, Johnny Dyani, Mongezi Feza and co certainly deserve to be more well known. To my ears Dudu Pukwana's In the Townships lp is an out an out masterpiece, as is Dyani's Witchdoctor's Son. I couldn't get this link to work however (CRC error-wouldn't expand) but I hope to cobble the money together to purchase this great Blue Notes set.

This looks like a great box! Received my copy some days ago but haven't had time to play much of it yet.

Anyway, here's a shout to this great blog, and allow me to put up a link to some compilations dedicated to South African jazz to be found on my own place, please:

In addition, you'll also find shows by Louis Moholo, Shannon Mowday and Alan Skidmore that might be of interest.