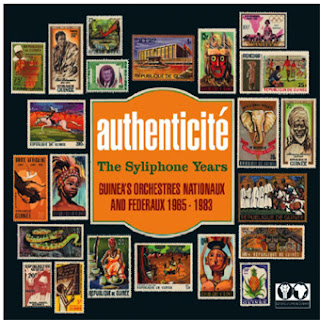 Here comes what is likely to be the African re-issue of the year. Its been lovingly compiled and detailed by Graeme Counsel and should be put directly onto your MUST BUY list.

"AUTHENTICITE: THE SYLIPHONE YEARS (1965-80)"
When the French colonial administration pulled out of Guinea in 1958, they took everything: all their medicines, blueprints to the electricity grid, furniture, telephones, even the cutlery. It seemed that the passionate cry of soon-to-be president, Sekou Toure - made while addressing a public rally and standing right next to De Gaulle - of "We prefer freedom in poverty to riches in chains" had become more true than perhaps even he had hoped.

Undaunted and with optimism and vigour, the new government set about rebuilding the country. They established a campaign that encouraged artists to create new works, but based on traditional African roots. The policy was called authenticite, music was its focus and Syliphone its record label. Thus Syliphone found itself in the right place at the right time - a special moment in African history when a new nation asserted itself and placed music at the forefront of its identity.

This 2CD set "Authenticite - the Syliphone Years" features gems from their catalogue, most of which are on CD for the first time, and gives you an insight into the incredible energy of the times. All the great bands are here, with key songs from such legendaries as Bembeya Jazz National, Keletigui et ses Tambourinis, and Balla et ses Balladins. Also here are rare recordings from their contemporaries such as Syli Authentic, and Kebendo Jazz; groups that battled for honours against more than 30 others in Guinea's renowned arts festivals, where a 1st Prize could launch a band to stardom.

Times like these can't last - and they didn't. But while they did, the party was jumping and the music was glorious.
at 6:45 AM

I have a serie like this in two cds from the label. Also they rereleased their hole Discoteque series and a few Bembeya albums and from other bands... I bought all years ago. :-)

The Sterns site has the tracks up now. It doesn't look like a lot of duplicates from African Pearls. Speaking of which, it's been really hard to find African Pearls series in the US (even in NY). Any idea if Sterns is distributing this in the US? The NYC closed and it's hard to get anything unless you pay a fortune to get it from London.

The Sterns site has the tracks up now. It doesn't look like a lot of duplicates from African Pearls. Speaking of which, it's been really hard to find African Pearls series in the US (even in NY). Any idea if Sterns is distributing this in the US? The NYC store closed and it's hard to get anything unless you pay a fortune to get it from London.

agree with you on the steep costs of mailing from sterns uk ... on a general note ... is there not some way we as the group of matsuli blog readers might be able to collectively leverage some relief in our global online purchases from labels such as honest jons and sterns? Matt?

We did try to avoid tracks which are on the African Pearls, Guinee CD. There are no duplications. There are also many tracks which have never been available on CD before, even on the Syliphone Discotheque re-releases from Sylla/Melodie some years ago. I think you will also find the sound quality to be better than Sylla's previous Syliphone CD reissues. Authenticite should be available in the US, I sent several hundred to Sterns US office, which although they are no longer running a retail shop, they still distribute our titles to other retailers in the States.

do you by chance know which US retailers Sterns US is distributing to?

Matt
I will for want this one and hope that it will be available in the US.
perhaps panafricallstars.com will have it. The owner who answers the the phone is a bit rude but he has leverage since he is onw of the few that has the product(s).
I hated dealing with him but had no choice.
wuod

My experience with Sterns usa has never been good. They never answer email or the phone. Hope they'll distribute this to retail stores though. Other Music in NYC usually is a good place to check. They carry Dakar sound and the African Pearls series and it's usually not as expensive as getting things from London. They have a website: www.othermusic.com

Stern's US hasn't oficially announced the Authenticite release but if they have it I can get it for you. They do have the African Pearls series and Bokoor Beats. Contact me at rsteiger@africassette.com

Great comp, I think there was only 1 track of overlap maybe it was Horoya Band that was also on their Dakar Sound release. I bought AuthSYLyrs digitally but may have to throw down when times are good for the booklet.

In the US one can find it at Amoeba, Othermusic and if you want to throw the dollars around $27.99 at the toney Virginmega(only saw 1 copy on the shelf) not yet on Amazon, but on dustygroove for $22.99, you can also find the entire compilation digitally on EMUSIC.

Who owns the images that are used for the cover on Rail Band
Belle Epoque vol.1 - Soundiata? I'd like to use some of the images with permission, who do I need to contact?