The "Franco of East Africa"

The Morogoro Hotel, Tanzania, early evening some time in the late sixties. The open-air make-shift band-stand hosts a new band born in the spirit of independence and African authenticity. Hired to keep the punters drinking and honing their skills from dusk til the early hours. The band is known as the Morogoro Jazz band and amongst its members are Mbaraka Mwinshehe and Salim Abdallah, both of whom were to go on to become legendary musical figures in seventies East Africa.

Mwinshehe was a self taught guitarist who had played South African-styled kwela in the Cuban Branch Jazz band, whilst Abdallah was a founder member of Morogoro Jazz but later left to form his own Cuban Marimba Band. In 1970 the band were invited to play at the Japan Expo and the first song today was made to celebrate this appearance. If you listen carefully you can actually hear Mbaraka singing a few verses in Japanese.

In 1973 Mwinshehe left Morogoro to lead a new band called Super Volcano. It was around this time that the popularity of Zairian rumba was being felt very strongly throughout sub-Saharan Africa. In particular it was Franco’s breakthrough hits of 1972/73 that really stirred up the appetite for rumba. The second song today tells of a friend who is going to Zaire and so Mwinshehe sends his greeting to all in Kinshasa and of course to the great musicians of the day – Maitre Franco and OK Jazz, Dr Nico and Afrisa Sukisa, Dewayon and Cobantu, Rochereau, Roger and African Jazz, Bokelo, Vox Africa, Les Grand Maquisards, Verkys, Negro Success...

The final song is from 1978 at the peak of his career, just before a nasty car accident on the treacherous Nairobi-Mombassa road ended his life. He died on a Mombassa hospital bed on 13th January, 1979 apparently from an excessive loss of blood and lack of a donor at that moment.

His career mirrored the golden age of African music – before rising oil prices and Reagonomics changed the music industry forever. He was known as the "Franco of East Africa" for his presence, his guitar playing and his spellbinding success as a performer.

Personally I can’t get enough of the seventies Tanzania rumba produced at the Polydor studios in Nairobi. 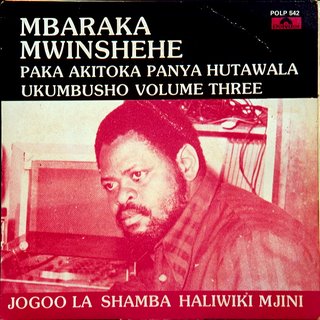