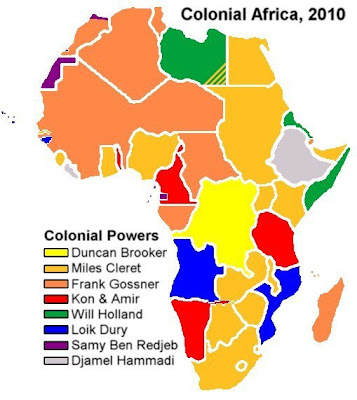 The recent article "The Scramble for Vinyl" by Chief Boima over at Africa is a Country blog caused a bit of a flutter and got quite personal. Understandably so. Those "accused" - including Will Holland (Quantic), Samy Ben Redjeb and Frank Gossner - responded alongside a number of others, myself included, to counter the provocative and plainly wrong positions put forward by the chief. The posting is now all the more valuable for capturing the dialogue that transpired.

But some of the nerve endings do not disappear - just two weeks ago I was asked to assist the Nascente label with original vinyl transcriptions of more than 10 Mahotella Queens tracks because Gallo in South Africa "no longer had them". I'm not so sure. I think the masters are there but no-one is interested in them and it's too much hassle to locate them. This is a familiar story since the retirement of Rob Allingham who ran the Gallo archive for a number of years.

Rob Allingham (eBayer "audiofile29") continues to provide valuable insight into a number of early recordings through his eBay auctions. I've highlighted a few of these below: 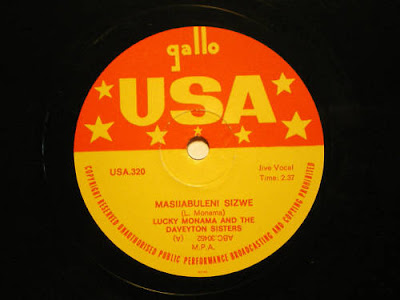 LUCKY MONAMA AND THE DAVEYTON SISTERS Masuabuleni Sizwe/Ulele Emini U Makoti USA USA.320 1965 E+ Lucky Monama was the drummer with the Makgona Tsohle Band which provides the instrumental backing here - the Daveyton Sisters were led by Nobasuthu Shawe who would shortly leave the group to join the regular line-up of the Mahotella Queens

RIO JAZZ REVELLERS OF PORT ELIZABETH Percy's Polka/Rosenberg's Rhumba Parade H.P.505 1955 E+ hot Cape Coloured-style jazz band with two saxes (not quite as fruity-toned as is frequently the case with this style), banjo, piano, guitar, bass and drums - recorded by Trutone on location and good quality too

S PILISO & HIS SAX Mulendze Phanda/Ngolale Mazweni C.T.C. STAR RECORD TA.701 1967 E+ tight hc almost to label - nap - superglued so it should hold 'S. Piliso' is Shadrack Piliso, Ntemi's younger brother, who joined Mavuthela Music as an assistant producer to Rupert Bopape. Shadrack was a trumpet player so this isn't him playing sax on this record but I can't identify exactly who is playing sax here. The Makgona Tsohle Band provides the backing

DIMA SISTERS Mokhosi/Haketshohe Letho Motella MO.128 1967 E+ This sounds rather like the Motella Queens plus a male tenor who solos on both sides (probably the H. Ramahali credited with writing the two songs.) Backed by the Makgona Tsohle Band.

NANCY JACOBS AND HER SISTERS Tain't What You Do/Bela Bela Quality TJ60 1955 E+ Jazzy vocal trio (the 'Sisters' were actually Nancy's mother and first cousin!) tackles 'Tain't What You Do', which they probably knew from imported copies of the classic 1939 Jimmy Lunceford version. 'Bela Bela' turns out to be a truncated version of 'Sunny Side Of The Street', minus the middle eight and with a different resolution to the main melody line.

And so with the sale of these recordings to wealthy bidders who put these sounds out of reach of mortal public, and in the commercial context of these not being viable for commercial issue what is to become of this history?

And who thinks it's important anymore?
at 9:11 AM

Matt - it is important - your blog led the way ... many blogs can and do share much of that music that would otherwise fall between the cracks ... with a little effort and communication I think there can be a positive co-existence and synergy between music sharing blogs and those labels pushing the re-issue boundaries ... hopefully some of the owners of the great vinyl bought from Rob Allingham et al will see fit to share their music .. hopefully those blogs sharing the painstakingly compiled re-issues will think twice about what they are doing. Chris