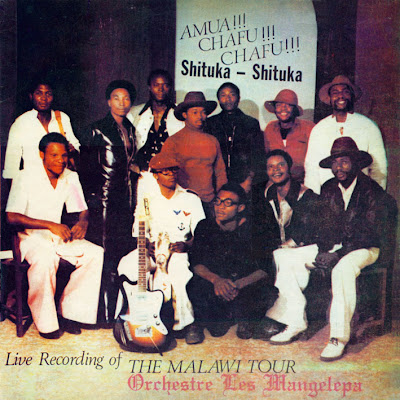 "Based in Nairobi, Les Mangalepa are sovereigns in their own musical kingdom 'Le Royaume Mangalepa' - which extends far beyond Kenya to encompass Uganda, Tanzania, Rwanda, Burundi, Malawi, Zambia and DR Congo (ex-Zaïre).

"The story of Les Mangalepa starts in the 1960s when, as members of Baba Gaston’s band in Lubumbashi, they led the migration of musicians out of Zaïre and into Eastern Africa, via Tanzania and on to Nairobi. Striking out on their own, they played their first gig as Les Mangalepa at the Park Inn, Nairobi, in July,1976.

"The name was corrupted from the French ‘Marquez le Pas’ meaning 'marching time', in which they parodied the army style, laying down an irresistible beat, which became the stylistic expression for their ever-growing 'marching army' of fans. The songs in this collection are taken from the period when Les Mangelepa were in their full pomp. They conjure memories of a golden period of East African music when the crowds flocked to Uhuru Park, Garden Square, Tents Club and Park Inn. Those coming to the floor for the first time can anticipate a sense of surprise at the joy and vitality of these recordings." - FROM RETROAFRIC.COM

This LP had been sitting, dusty and undisturbed for at least 10 years before the matsuli crew rescued it from the humidity, dust and heat of a warehouse in Durban. Unfortunately no cover! Previously we'd had a number of ideas as to the origins of the Sango label and no-one seems quite sure about its origin or history. The best guess so far is that it was an "export" only label for countries such as Malawi, Zimbabwe, Zambia, Mozambique and South Africa. "The second part of the Sango story is as a late 1970s-early 1980s label of convenience for East African records from the ASL, African Beat and Polydor catalogues that were evidently pressed up for export, many retaining their original catalogue numbers for those labels." (Tim at KenTanzaVinyl) 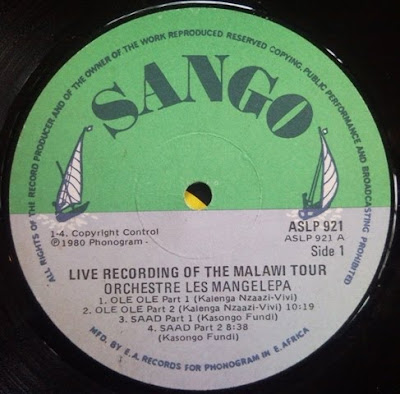 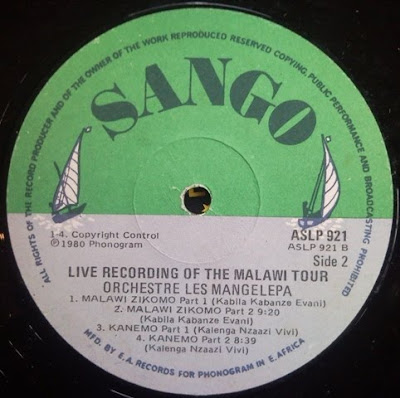 For more information on Congolese bands in East Africa visit MUZIKIFAN. You can buy the wonderful compilation of their material ENDURANCE through most friendly retailers such as STERNS.
at 8:57 AM

Fantastic post - Les Mangelepa are one the best of a golden age in East Africa (Simba Wanyika being my all time favourites!)- I only wish I could download it - I've been trying all day. Rapidshare is making it increasingly difficult for "non-members" to share and is no longer the convenient service it was - mediafire and megaupload now seem much more user-friendly. I'll persevere for now - many thanks for this great music. from MamboPete

Thanks a million. Another excellent post as usual. Any way you can get your hands on another one of Les Mangelepa's LP "Tour of Zambia"? Please search high and low..:-)
Thanks again for "Malawi Tour". The best of 2010 to you and yours.

hey Matt
Happy new yr
thanks for this rare gem, but I have been having beacoup problems downloading it. Is it possible to have it on media fire or use sendspace for some limited downloads as folks try rapidshare

Matt
Many thanks for the new link

Many, many thanks for this! I had this cover (poor copy) in my files; believe I got this from Ntwiga.

thanks Joe, I'll clean it up and edit the post for the readers who are still ontheir way to this post

This is the new link to my site Africolombia.

please, replace it by this one

Tremendous, Matt. Glad to see you back in the saddle.

What a fantastic music. Thank you very much.

What a fantastic music. Thank you from a place in the mist. Gives me sunshine feelings