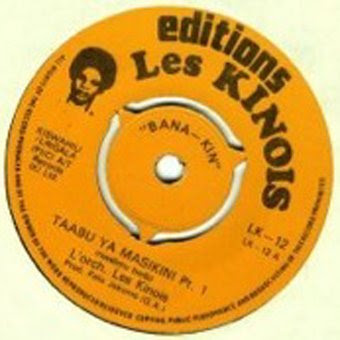 This morning I received the publicity flier for Samba Mapangala's upcoming live shows (see below). By co-incidence I was looking for some of his early material with Les Kinois following a discussion with Stefan at World Service. After some trawling through the digital archives I came across two albums both of which were passed on to me from a visitor to the Melodica Record Store in Nairobi. The album I'm sharing with you today was labelled Malako Disco Original and despite the annoying crowd applause tacked on contains some of the songs that would make their way onto Samba Mapangala's break-through LP from 1982 "Its Disco-Time". Check this post for the history of that record. 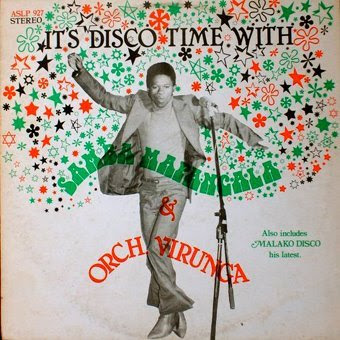 Background from myspace/sambamapangala :
Born in Matadi, Congo, Samba Mapangala moved to Kinshasa in the early 1970s, to pursue his secondary education. Inspired by legendary Congolese vocalists Tabu Ley Rochereau and Soki Dianzenza, it was there that Samba began his singing career.
Samba’s early years included stints in the groups Bariza, Super Bella Bella and Super Tukina. It was while touring in Eastern Congo in 1975 that Samba and other musicians separated from Bikassy Bijos’ Orchestra Saka Saka. Recruited by a Ugandan promoter, Samba and his comrades set up camp in Kampala. There, they formed Les Kinois, with Samba as lead vocalist. In 1977, Les Kinois shifted their base to Nairobi, where they made their first recordings on 7” vinyl with Melodica Records. Hits like the original Malako, Sunday, Christmas and Sigana Mar Anyango rang out over the airwaves.

Les Kinois gave way to Orchestra Virunga in 1981, with Samba as bandleader and lead vocalist. 1982 saw the release of the “Disco Time” LP, which included Malako Disco, Virunga and other hits. Released internationally as “Virunga Volcano”, this album has been recognized in “World Music: 100 Essential CDs” by Simon Broughton.

Yet again, you've brought that East and Central African magic touch to this blog. Many thanks for sharing this rare gem. I agree that the canned applause pasted on to the tracks could have been skipped.
If you ever find the very original Malako by Les Kinois on vinyl, please remember to digitise it and share it here before you sell the vinyl for a fortune on e-bay! :)

there are few people who find time posting this thing..im glad that you still manage to do it..:)

Hey-How To?
Tutorials for your blog! Rapidshare, Megaupload, Easyshare...

Its been reloaded for an extended period. Next up the AIT LP from Les Kinois!

I look forward to the AIT LP from Les Kinois! :D

No longer available for download. Please use a storage place that last longer as Rapidshare, Megaupload or Easyshare.

It really hurt to see but not be able to get this great music.

Unfortunately the link is dead. Can you please re-up it??

hello-
I am currently working closely with Samba, and I don't believe he has a copy of this record. Could you e.mail and let me know how to download it? I see the password but don't know the log-in.