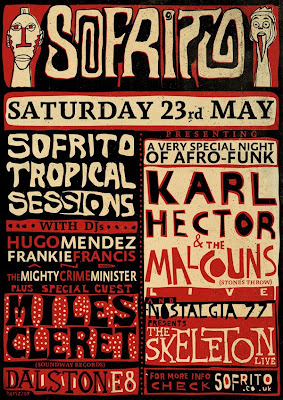 The Sofrito crew have put together a very special evening of Afro Funk at the Empowering Church in Dalston on Saturday 23rd May! So far the line includes:
KARL HECTOR AND THE MALCOUNS (LIVE)
NOSTALGIA 77/THE SKELETON (LIVE)
SOFRITO COMBO
HUGO MENDEZ & FRANKIE FRANCIS
PLUS GUESTS
MILES CLERET (SOUNDWAY)
THE MIGHTY CRIME MINISTER
HOSTED BY
MC KWASI
9:30 TIL VERY LATE – FIRST BAND ON AT 10:30


Karl Hector and the Malcouns have been described as “Afrodelic Kraut Funk from the minds behind the Poets of Rhythm and the Whitefield Brothers.” Headed by the mysterious Karl Hector – erstwhile leader of the Funk Pilots project – and aided by Poets of Rhythm/Whitefield Brothers guitarist Jan Whitefield alongside Thomas Myland and Zdenko Curlija (founders of the Malcouns), the band take a trip through heavy psychedelic Afro Funk, taking in melodies from Ethiopia and Sub-Saharan Africa. Their album Sahara Swing came out on Stones Throw/Now Again last year but their sizzling live show has never been seen in the UK - the 23rd May is their first UK appearance!

The Skeleton is a new Nostalgia 77 project and to top it all off the Sofrito DJs Hugo Mendez and Frankie Francis will be playing the best in Hot Tropical Rhythms, with special guest Miles Cleret (Soundway), the Mighty Crime Minister and MC Kwasi to complete a night of Tropical fun!

Tickets are £15 – advance tickets ONLY. Tickets from Sounds of the Universe in Soho (plus £1 booking fee) and Honest Jons (Ladbroke Grove), as well as by email (discos.sofrito@gmail.com/.