A couple of weeks ago I was speaking to an old mate of mine in Jozi and asking him if anything new and exciting was happening on the music scene. He told me to check out for the the Blk Jks (Black Jacks) and promised to hunt down some of their stuff. Now today I was in the West End of London with some time to spare and I happened to go into Phonica Records on Poland Street and what should be in the racks but the Blk Jks 10" single which I listened to and brought home. 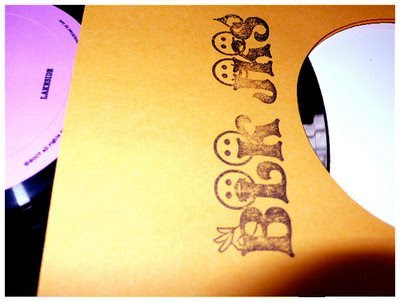 More from myspace/blkjks: Childhood friends Linda and Mpumi grew up on the same block in Johannesburg’s East Rand, where they taught themselves guitar after Linda’s sister received one as a prize in church choir. Forming a band in 2003, early BLK JKS shows and recordings we remarkable for their stacks of guitar drone and head nodding beats, but it was with the addition of bassist Molefi and drummer Tsepang—both of Soweto—that BLK JKS began work with a fresh approach and plunged into its current universe of sound. Heavy club dates and festival gigs followed as they band earned a loyal following across the country. In June 2007 the BLK JKS released a handful of songs as a limited edition CD EP that was quickly snapped up by hardcore fans and knowing collectors. The November 2007 release of the “Lakeside” vinyl-only 10in marks the band’s international debut with a limited edition of 500 selling at some of the world's best record shops: Rough Trade (London), Soul Jazz (London), Phonica (London), Rush Hour (Amsterdam), Turntable Lab (NYC), Other Music (NYC), Dusty Groove (Chicago), Jet Set (Kyoto/Tokyo), Canned Applause (Johannesburg) and Mabu (Cape Town).

Thanks for passing on the tip, Matt. These guys sound great. I can't wait for the CD to come out.

Thought I would wish you a very Happy New Year!
Thanks for the music
Alex

I just heard the band recently and im a fan!! happy new year

Here is the deal… sign up for paypal and just buy your own free
rapidshare premium account.

thanks yo,its refreshing to find something truly unique among the hype.