God of the guitar 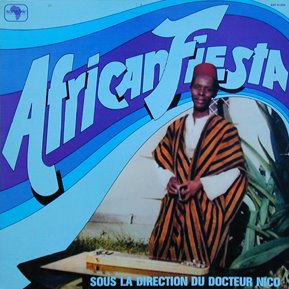 Today a musical overview by podcast/MP3 that provides an overview of Dr Nico's body of work from the 1960s and 70s. And in words I can't do better than Alastair Johnson from his brilliant Muzikifan site:

DOCTEUR NICO & AFRICAN FIESTA
Hailed throughout Africa as "le Dieu de la Guitare," Nicolas Kasanda was born of Baluba parentage on 7 July 1939 in Mikalayi in the Kasai province of the then Belgian Congo. His father played accordion. In 1950, aged 11, Nico was introduced to Opika Studios by his cousin Tino Baroza and older brother Mwamba Déchaud who were session musicians there. At 14, he joined Joseph Kabaselle's African Jazz. In 1957 he took up electric guitar and can be heard playing electric guitar on 'Sophie ya motema,' recorded in 1960. In 1961 he temporarily split with Kabaselle and formed African Jazz Aile Nico before returning to Kabaselle in 1962 and 1963. (Vincent Luttman cautions that some of the early Surboum African Jazz recordings of this period thought to be featuring Nico are played by Tino Barozo. Luttman also points out, very perceptively, that Nico's later signature choppy guitar style when he is chording behind a vocalist, is based on Manu Dibango's piano technique: which was his own unique version of the montuno piano style he brought to collaborations with Kabaselle.) Young Nicolas Kasanda graduated with honours from high school and went on to college, while keeping his night job as Leopoldville's hottest young guitarist. He taught auto mechanics at the Christian Brothers school in N'djili district, Kinshasa, which earned him the nickname 'Docteur.'

Nico quit teaching and broke away from African Jazz to form African Fiesta in 1963 with Tabu Ley Rochereau, brother Déchaud, Kwamy, Mujos, Depuissant on conga and bassist Joseph Mwena. The band was joined by Roger's brother Faugus Izeidi on third guitar, with Paul Mizele and a Congolese woman singer (with a Greek name) Photas Myosotis ("Forget-me-not") on vocals; Dominique "Willy" Kuntima doubled Jeef Mingiedi on trumpet. [Information from Gary Stewart's book RUMBA ON THE RIVER.] When Rochereau split in 1965 to form African Fiesta National, Nico reformed his group as African Fiesta Sukisa, which existed until 1973. They ruled the roost in the late sixties, with endless hits. However, in 1969, the entire band, except his brother Déchaud, walked out because they felt they weren't getting their due. Nico quickly assembled a new band that included Josky Kiambukuta and Lessa Lassan on vocals. Bopol Mansiamina joined on guitar in 1970 and they kept it together for a few more years. Success eluded Docteur Nico in later life and he drank heavily, leading to his early death in a Belgian hospital on 22 September 1985. His improvisations are so surprisingly fluid and ecstatic that he truly earned the nickname 'God of the Guitar.'

Look out for the Words of Love version and the quasi-soul shout out of Save Me. When it seems as if Nico is crying into the microphone on the track Pauline I am taken away...

Original covers for these LPs can be found at the Bolingo site. 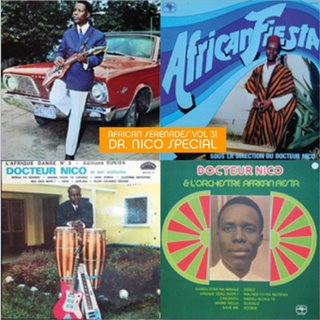 Is this podcast still available anywhere?