Lizzy Mercier Descloux in Soweto with the musicians that helped her create her Soweto LP in 1983. Ze Records have done a great job of re-issuing her LPS Press Colour and Mambo Nassau but CBS France have been very quiet about getting a reissue of the Soweto LP onto the racks. Dusty Groove show an upcoming release entitled Zulu Rock which was one of the tracks from that LP so it will be interesting to see if it does indeed hit the racks this year. 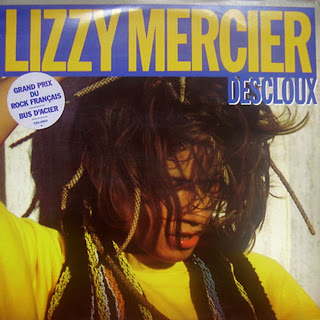 Lizzy Mercier (1956-2004)
Born 1956 in Les Halles, Paris - left for New York in 1975 - creates French magazine Rock News with Michel Esteban - has collection of poems Desiderate prefaced and illustrated by friend Patti Smith - as Rosa Yemen records 6 tracks for Ze Records in 1978 - acts in a number of short films - records first LP Press Colour in 1979 - befriends Jean Michel Basquiat - records second LP Mambo Nassau in Bahamas in 1981 - visits Asia in 1982 - goes to Africa in 1982 visiting Ethiopia and South Africa - records Lizzy Mercier Descloux in South Africa with mbaqanga session musicians - returns to South Africa in 1984 - performs at the legendary Pelican Club in Soweto - singles Gazelles become big hit in France - prepares a new LP to be made in New Orleans - in 1985 moves to Rio to record One for the Soul - meets Chet Baker who ends up playing on the album - moves to Sri Lanka to write novel - 1986 back in Paris again - records last album in London "Suspense" with Mark Cunningham, the trumpet player in Mars - moves to West Indies and paints - moves back to Corsica in 2000 - in April 2003 cancer takes her....