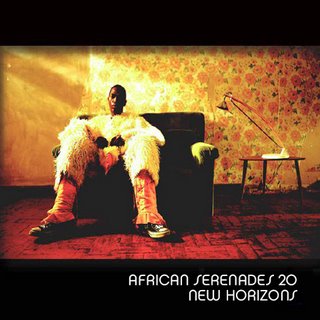 The African Serenades series has been compiled by a number of individuals who frequent the Blood and Fire and Reggae and Stuff message boards. Today's download is a mix of all the tracks on the CD. In addition - but not on the CD - is an eclectic modern collaboration/remix of an Abdullah Ibrahim track.

New Horizons means just that- music that draws on African traditions and forms but that goes beyond them with the involvement of European remixers, collaborators and musicians. The biggest new forms out of Africa have been hip hop and Kwaito, both of which get a significant voice here. For a true sampling of kwaito its worth checking out Trikont's compilation Mzanzi Music or the Sterns compilation Kwaito. Otherwise get hold of the soundtracks from the TV series Yizo Yizo (the fantastic pic for my compilation comes from the Yizo Yizo promotional material). Or just explore Rage

The issue of authenticity and modernity have been debated to death in music circles so I prefer to let the music speak...
at 10:48 AM

fantastic music! a tracklisting would be
very nice!
petter

well bit disappointed to find I couldnae lissen to Abdullah - look for lovely oldie African Space Programme - seems to be a problem connecting to your server, couldnt download either. Nice site, highly attractive choice of sounds