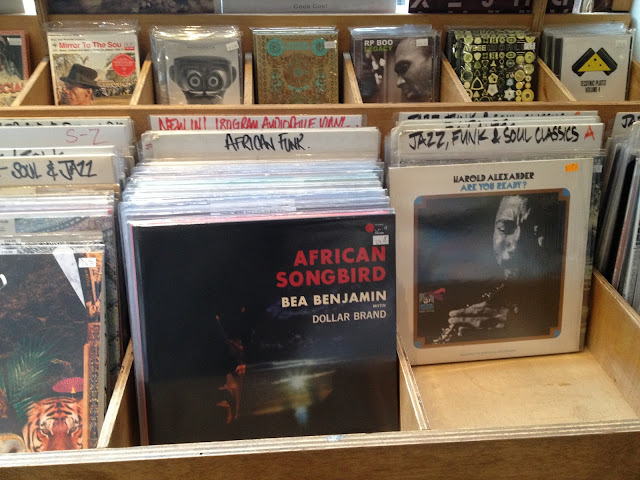 
"The opener is a first-round knockout: moody and hurting, soaring and visionary, with Dollar Brand threading electric keys through the free-fall, doubled-up, deep-funk drums and bass. Then some delicate Cape Town swing, featuring Basil 'Manenberg' Coetzee on flute; and finally Sathima herself, alone at land's end, like a bird. Originally released in 1976 on Rashid Vally's As-shams label this is a profound, ravishing, spiritual-jazz masterpiece from South Africa - a long overdue revive, prefectly realized" - Honest Jons


Finally the day has come after more than five years in preparation for me to announce that African Songbird is now available to purchase for the first time in more than 37 years.....thanks to all that made the London launch party and I look forward to the Cape Town launch in early July. The fight against forgetting continues...


Media release:
Matsuli Music is proud is announce the re-issue of African Songbird, the spiritual jazz masterpiece from South Africa’s greatest jazz singer, Sathima Bea Benjamin. Originally released in 1976, African Songbird was a debut long overdue. A 1959 recording, which would have been one of South Africa’s first ever jazz LPs, was shelved. Her 1963 recording with Duke Ellington and Billy Strayhorn was put aside by Reprise’s then head of A&R, Frank Sinatra, for not being commercial enough.


African Songbird is a tour-de-force, and arguably the most dramatic and powerful release on Rashid Vally’s As-shams label. The opener, ‘Africa’, is the album’s fulcrum, a statement of breath-taking musical, personal and political complexity. It is a song of exile, of loss, and of return: a song that is both personal and universal, speaking for a people made homeless in their own land, speaking to those whose ambivalent embrace of exile ached for a homecoming. It speaks too of hope and resolution.


Africa is a personally powerful declaration from a remarkable African woman: a song of deferred self and dislocated space finally resolved in an emotional homecoming.  It is a song of celebration and mourning – a heartfelt paean to her home that is shot through with the raw sorrow of lament.


Sathima’s voice, wholly unique in jazz singing, gradually sheds its musical supports as the programme develops. From the thickly-layered tumult of Africa, through the characteristic Cape Town swing that informs Music, the instrumentation is quietly reduced, then finally dispensed with. The title track is performed acapella, but for the natural sounds of the sea coast, the gulls and surf of the Cape itself. After many years of silence, two deferred albums, and over a decade of rootless exile from a home that had been made inhospitable by the inhumanity of apartheid, Sathima’s voice is finally heard, alone with her song, naturally, like a bird.


Sathima’s career has been challenged throughout by a struggle to be heard. Her repertoire was resolutely uncommercial. She never played on her African roots to gain acceptance internationally, and her complete commitment to classic jazz idioms never wavered: as an African artist, this made it difficult for audiences, critics and record companies to understand the nature of her talent. The unique genius and global success of her husband Abdullah Ibrahim (previously known as Dollar Brand) cast its own shadow, and as the mother of two children, music could not always be her first priority. These challenges were exacerbated by the pressures of political exile, and for Sathima, due recognition was late to arrive.


In recent years Sathima Bea Benjamin’s extraordinary life and unique work have received the critical attention and acclaim they richly deserve. Despite this, African Songbird, her first released record, has remained unavailable and largely unknown. This reissue remedies that situation in restoring and making available again an important keystone in South Africa’s jazz heritage.


Sathima Bea Benjamin currently lives in Cape Town. She continues to perform the material that she first recorded for this disc. In association with Rashid Vally and Sathima Bea Benjamin, Matsuli is proud to present this album in its original form, making it available again for the first time since initial release. A crucial piece of South African and global jazz history, African Songbird is courageous, revelatory music, and Sathima’s unique voice is the bearer of its message. It’s easy to see why Ellington was convinced.

These great commercial jingle noted in Advertising Age as one of the top from the century have endurance and durability that elevated the bar for that type of work we all do at RedHot today.

Such a great record!!
Please don't get me wrong here but i am a little confused. I just played the a-side of this reissue and there are several clicks or pops that make it hard to concentrate on the percussion. Of course i know this is made from an old record or master tape but i just like a little confirmation if all these pops were on the original LP - or maybe it is the reissue quality itself. The record was sealed and i checked it for dust or little vinyl parts - but the "pops" remain. I could check another pressing. No offence, once again.
Thank you very much for all the matsuli reissues.

I think it's all clear now - when i listened to the record with headphones, you realise it is a drum sound that reminds of a crackle or pop when played over speakers. That was a new experience for me !!
sorry for spending confusion in my first post.
i love your releases!!