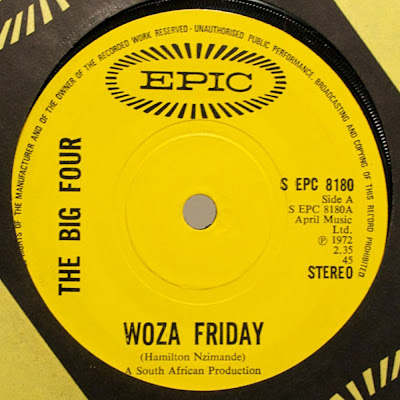 Fully appropriate for the end of the week. Woza Friday - literally "come here Friday" - by the Big Four is another South African 45 that saw issue "overseas". Classic early seventies mbaqanga that someone thought could sell in the UK. (Perhaps to all those miners in Wales? But thats another story) The Big Four comprised Moses Dlamini, Hamilton Nzimande, Isaac Luvuno and Brown Duma and they called the music they created "monkey jive". Hamilton moved into production for EMI whilst Moses and the other band members acted as talent scouts for Hamilton. In 1966 Hamilton moved over to the Gramaphone Record Company. In 1974 Moses was approached by Titus Masikane to help find a recording contract for a group of four youngsters from Hammarsdale in Natal. They were David Masondo, Zakes Mchunu, Duza Mthethwa and Mpompie Sosibo, initially known as the Young Brothers. GRC changed their name to the Soul Brothers and with a lot of pushing and promoting from Moses the rest is history. I have just one copy of this 45 over in my shop here. 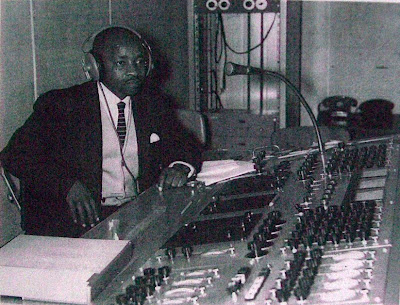 Hamilton Nzimande at the controls