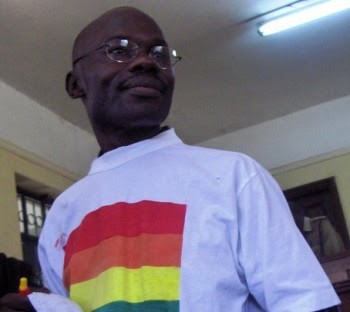 "We the undersigned wish to express our deep sadness at the murder of Ugandan human rights defender David Kato on 26th January 2011. David's activism began in the 1980s as an Anti-Apartheid campaigner where he first expressed a strong passion and conviction for freedom and justice which continued throughout his life. David was a founding member of Sexual Minorities Uganda where he first served as Board member and until his death as Litigation and Advocacy Officer and he was also a member of Integrity Uganda, a faith-based advocacy organization.

David was a man of vision and courage. One of his major concerns was the growth of religious fundamentalism in Uganda and across the continent and how this would impact on the rights of ordinary citizens including lesbian, Gay, Bisexual, Transgendered / Gender Non-Comforming and Intersex [LGBTIQ] persons. Years later his concerns were justified when the Ugandan Anti-Homosexuality Bill backed by religious fundamentalists was outlined in 2009. David was also an extremely brave man who had been imprisoned and beaten severely because of his sexual orientation and for speaking publicly against the Anti-Homosexuality Bill.

Many African political and religious leaders in countries such as Ghana, Nigeria, Cameroon, Zambia, Gambia, South Africa, Zimbabwe, Uganda, Malawi and Botswana, have publicly maligned LGBTIQ people and in some cases directly incited violence against them whilst labeling sexual minorities as “unAfrican”.

In October 2010, the Ugandan tabloid, Rolling Stone published the names and photographs of "100 Top homos" including David Kato. David along with two other LGBTIQ activists successfully sued the magazine on the grounds of "invasion of privacy" and most importantly, the judge ruled that the publication would threaten and endanger the lives of LGBTIQ persons.

The court did not only rule that the publication would threaten and endanger the lives of LGBTIQ persons but it issued a permanent injunction against Rolling Stone newspaper never to publish photos of gays in Uganda, and also never to again publish their home addresses.

"Gays are also entitled to their rights. This court has found that there was infringement of some people’s confidential rights. The court hereby issues an injunction restraining Rolling Stone newspaper from future publishing of identifications of homosexuals."

Every human being is protected under the African Charter of Peoples and Human Rights and this includes the rights of LGBTIQ persons. We ask the governments of Uganda and other African countries to stop criminalizing people on the grounds of sexual orientation and afford LGBTIQ people the same protections, freedoms and dignity, as other citizens on the continent."

Barbra Jolie, Me I Think

Sean Jacobs, Africa is a Country

Sonja Uwimana, Africa is a Country

Zion Moyo, Sky, Soil and Everything in Between
at 9:53 AM

Thanks for spotting the error. Without attention tomorrow may mean someone else facing a similar fate.

.........and the South Africans recently hosted the Ugandan leader in KwaZulu where he was raped in leopard skins as an honorory warrior. hmmmmmmmmmm

Matt, Thank you for showing solidarity by signing onto this statement. As a regular reader who also happens to be LGBTQ, I appreciate this very much.

Seems like religion is a perfect niche for the world's most militant haters. RIP David Kato and all those others who are attacked for attacking no one.

break the chains of mental slavery...

freedom and love for all!

RIP David Kato and all those unknown

Must we yield our African culture to perversion of European influence? This bullshit by so-called sexual minorities is nothing but crap concocted in foreign places to impose an odious foreign lifestyle on Africans. No one supports murder, and no African should support homosexuality.

"Us" and "them". "Ours" and "theirs".
Get a grip brother/sister and put your flamethrower down.

The human capacity to love is not a "foreign lifestyle". Support your African brothers and sisters and don't buy the hate being peddled by Bahati and others : their anti-homosexuality bill is the only "foreign import" here, read the history and understand.

Thank you for your great blog and bold stand for freedom