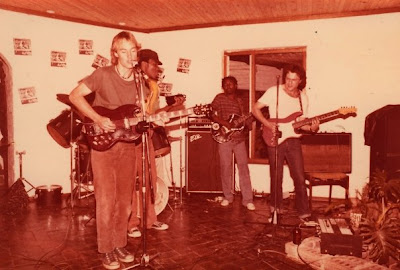 The earliest line-up of National Wake including Paul Giraud and Mike Lebese
Michael LBS - its an LP that was on my wants list for over 20 years. More memorable than the music is the reflection it throws on the early eighties in Jo'burg, South Africa. And it's a stepping stone of sorts, marking a place on the musical landscape between the afropunk of National Wake, the conscious afro-jazz sounds of groups like Tou, Afrika and the Malopoets and the Soweto reggae bands Splash and Dread Warriors. Michael Lebese made this LP but never took the band or songs live. A number of the songs (Corner House, Going Away, and Sitting on the Beat) were composed by National Wake, a band that Michael started out in with Ivan Kadey. For more on National Wake check my old posting on the band and the times. There is a great audio documentary on National Wake here as well as further detail at the Facebook site Ivan has set up. 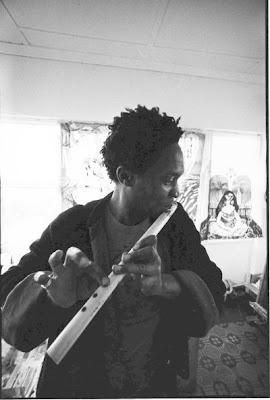 Michael Lebese
I've always had it in my head that Michael chose to give himself the moniker LBS after LKJ. Note the Tapper Zukie LP on the cover. There was even a record store in Jo'burg called Vinyl Jah-nkies. But the true story of pre-Lucky Dube reggae in South Africa is for another time. 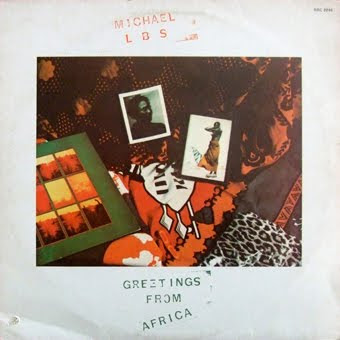 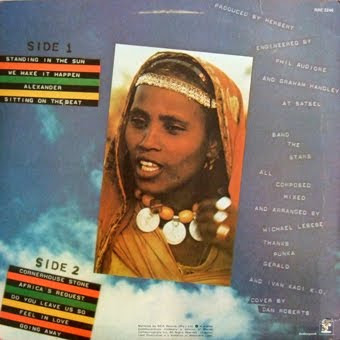 Michael LBS - Greetings From Africa (RRC 2246, 1981)
1. Standing in the Sun
2. We Make it Happen
3. Alexander
4. Sitting on the Beat
5. Cornerhouse Stone
6. Africa's Request
7. Do You Leave Us So
8. Feel In Love
9. Going Away
Produced by Herbert, engineered by Phil Audiore and Graham Handley at Satbel
Band The Stars, all composed, mixed and arranged by Michael Lebese
Thanks Punka Gerald and Ivan Kadi K.O., cover by Dan Roberts
LINK
at 8:55 PM

Incredible stuff. Not familiar with National Wake or afropunk...definitely going to do some investigating now

sounds pretty cool, thanks for shedding some light on this one!

Rockhouse Worldwide Music
we offer one of the most extensive online music store anywhere: we currently offer

All music-related product! In addition, we offer a great selection for used & collector items. Included in our online

offering is other music-related merchandise such as T-shirts, magazines, books and video games.

Hi, I love african music. I've just began my own blog about black music: http://soulyotrosalimentosdelalma.blogspot.com/ . I hope you like it and if you want we can change links. Thanks very much