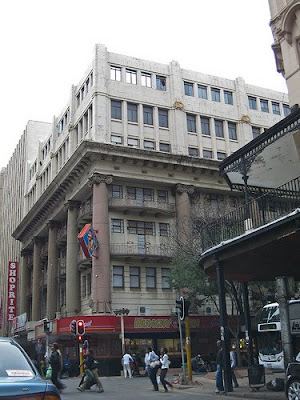 Hopefully this is not going to be a completely obscure reference but the cover design of these two compilations of South African jazz reminds me of the budget compilations produced specifically for the OK Bazaars - a major retail chain in South Africa. The photo above shows the OK Bazaars building at 78 Eloff Street Johannesburg.

For reference I took the following short history from their website: "In 1927, Johannesburg's shopping hub consisted of four blocks along the west side of Eloff Street above Pritchard Street. So it was a risk of major proportions when two young upstarts, Michael Miller and Sam Cohen, opened a store a full block south of Pritchard Street, and on the wrong side of the road. They called it OK Bazaars. OK Bazaars was an instant success, and expanded rapidly throughout South Africa, becoming one of our most trusted and loved household names. In 1929 the business was listed as a public company on the Johannesburg Stock Exchange. And by 1967, the OK Bazaars had opened 100 stores."

Anyway I remember OK Bazaars as the place where my sisters used to buy their "Seven Singles" for 49 cents and their "Long Players" for R1.49. Amongst original artists OK Bazaars could be relied upon for cheaper cover versions of current hit parade songs and I particularly associate them with the Springbok Hit Parade series. For the full story on the Spingbok Hit Parade series check out this website. Note the text "Original Artists" on these covers. But enough of all that. These two compilations I am sharing today are an amazing snapshot of key jazz recordings from the seventies. 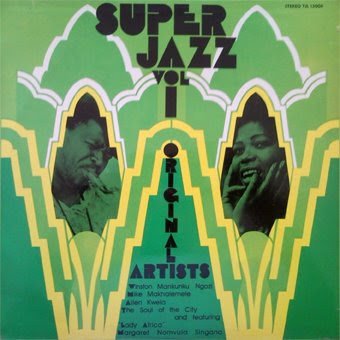 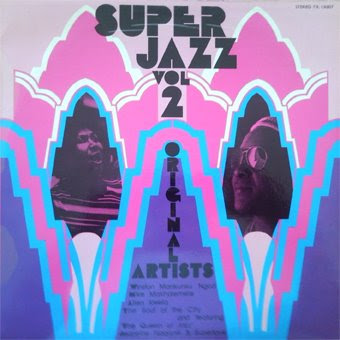 Sleeve design on both records is by "Space and Design". The compilations were marketed by Satbel Record Company and made available on 8 track Cartridge and Cassette. Makes me think they were put out in the late seventies. Anyway enjoy them whilst they are available for sampling.
at 2:39 PM

jazz music sounds really good...i like the melody of this kind of music...

Thanks for both of these great discs. You do great work here!

Great. Thanks a lot.

Another one excellent post ...
What a wonderful site you have!!!
Thank you very much.
Please ,if you have the time ,try to upload a better scan from the back cover of: Super Jazz Volume 2(TJL 13007)
Thank you again...All the best!!!
Kostas from Greece.

i have been feasting
thanks!
wuod k

sexy said...
This comment has been removed by a blog administrator.
March 30, 2009

Great works!!!
For quite sometime now i have been looking for all Matshikos (South African Music) but to no avail. Can someone weth imformation on were i can get this music imform me on: