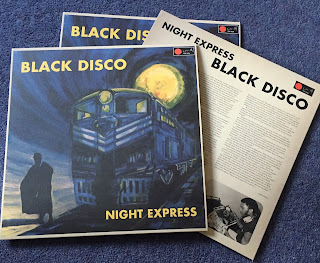 “One of the labels deserving a big shout out is Matsuli Music.”
- GILLES PETERSON, BBC

Part Philly-soul, part Cape Jazz and part bump-jive, the album not only achieved instant acclaim in South Africa’s townships, its appeal tore right through apartheid’s racially defined boundaries. Along with bassist Sipho Gumede, saxophonist Basil ‘Manenberg’ Coetzee, and drummer Peter Morake, Black Disco were exploring a new hybrid sound. This music offered hope in the midst of growing repression. “It was our way of saying we are with you”, recalls band leader Mohamed.

Night Express – part of a series of ‘70s releases, three as Black Disco and two as Movement in the City – lives on as a declaration of musical identity from communities whose jazz histories have hardly been documented yet – the apartheid defined ‘coloured’ townships of Johannesburg’s East Rand.

“The name – Movement in the City - was code for let’s fight the system. It was a very dark time of us, personally and politically, and the two albums we made including Black Teardrops (another title the censors didn’t like) came from that emotional place.”

Increasingly, Mohamed’s searching took him towards his roots. “I figured that protecting and preserving our indigenous music could be my contribution to the struggle. We must know our heritage. I thought: if the Boers take that from us, we’re fucked.”

So Mohamed’s journey, which began as a boyish organ player doodling Timmy Thomas-style riffs on Night Express has now brought him to a role today as a kora master and producer, collaborating with Khoisan traditional healers and their music. But the Black Disco group was, for him, where it all started.

TRACKLISTING
A1. Yasmeen’s Blues
A2. Night Express
A3. Super Natural Love
B1. Oh Happy Day
B2. Echo On The Delay
B3. Odds On

Originally issued on the independent As-Shams/The Sun label in 1976.

Available at independent record stores and with a digital download code from www.matsulimusic.com

I bought this one 17 years ago on CD at Joburg airport. Fantastic record. Since then I have been looking for part 1 and 3. Is there any change they will be available on CD in the near future?