This is Our Music! Baloji meets Baobab at the Barbican 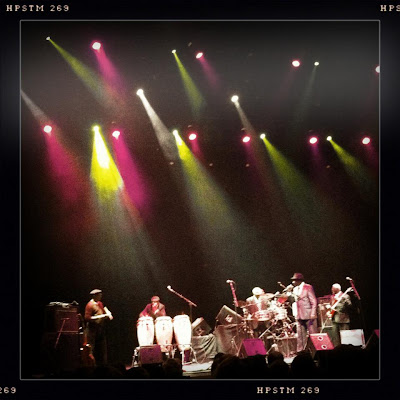 As if to reclaim ownership from the hi-brow Barbican audience opening act Baloji marked his ground with the cry: "This is not world music, this is our music!" With just 45 minutes to rouse the seated audience Baloji managed against the odds to deliver small band renditions of key tracks from his Kinshasa Succusale album of last year. But much of his thunder was stolen by one-time Franco guitarist Dizzy Mandjeku, particularly on modern reworking of Grand Kalle's Independence Cha Cha Cha and on the closing number where the hints towards some classic rumba congolaise had most of us up and swinging. 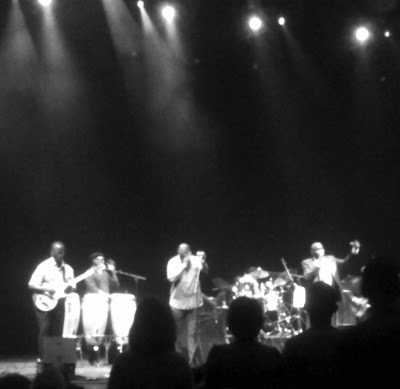 By contrast Orchestra Baobab had nothing to prove. From the opening strains of anchor-man Barthelemy Attisso's guitar to the comic antics of Issa Cissoko on saxophone we were treated to 100 minutes of non-stop afro-cuban classics from the back-catalogue. For me the slower numbers, especially Ultra Horas (Pirates Chpice) and Dee Moo Woor (Specialist in All Styles), stood out. Even the evident casualness of the band's approach did not detract from their wizardry in performing songs that have gotten under my skin since the very first time Charlie Gillet introduced me to them some time late in the 1980s.


Rare footage of the Baobab Club with Thione Seck leading a lineup of Baobab with the classic Bamba
at 7:48 PM