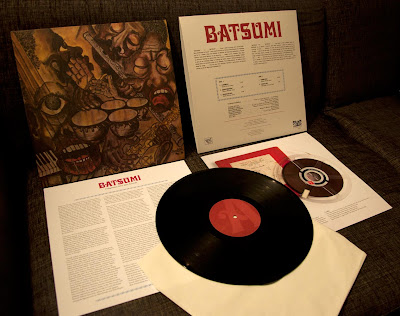 For the first time in over 35 years Batsumi's glorious 1974 debut album is finally available once more. The remastered reissue is the second in Matsuli's ongoing programme to restore important but neglected South African afro jazz recordings back into print.

Francis Gooding, who wrote the detailed sleeve notes, had this to say:
"Almost as if it was unexplored territory, the extraordinary landscape of South African jazz is frequently mapped out by reference to a few well known landmarks: the glorious township swing and hot jive of the 1950s; the fame and misfortune of the modern jazz exiles of the 1960s, and their energising presence in Europe; the towering trans-national figures of Miriam Makeba, Hugh Masekela and Abdullah Ibrahim. For the jazz music and musicians of South Africa that did not by chance or choice fall into one of these categories, the long silence of history has only intermittently been broken, and the legacy of past iniquities has served to consign many names on South Africa’s long roster of jazz giants to an undeserved obscurity. A wealth of music does not yet appear on the map, but when the contours of the jazz scene under apartheid begin to be surveyed in more detail, it is clear that a space must be marked out for the Soweto-based group Batsumi."

Dan Magaziner says:
"The music is stunning...As it builds, it swings, coalescing into a uniquely compelling statement of intent. By the time and sax and flute solo over organ, bass and drums, Batsumi has got you."

Take a quick listen here and make your own mind.


The reissue is available on vinyl in a limited edition of 500 copies, each hand-numbered and provided on heavyweight 180g vinyl with detailed sleeve notes. It is also available as a digital download from online music retailers such as iTunes, Amazon and eMusic. It can even be streamed via Spotify.

To get a copy of this landmark album you can purchase using the following options:

DIRECT for buyers in SA

CD on Demand via Amazon

For wholesale orders of more than 10 copies please
contact me

Standing ovation, Matt. Can't wait to hear what you've decided to reanimate next.

Is it possible to receive the sleeve notes if I buy this on iTunes? Listened to the stream and both the music and the blog are worthy of support. Thanks!

Ben. Please drop me an email and I will send them directly. The electronic distribution company I use does not enable sleeve notes for iTunes.

Will this be reissued on cd as well, like Chapita was? I see that amazon has a cdr release but not sure if that how that will differ from just buying the mp3's? Chapita was beautifully done on vinyl but my finances are a bit tighter this time around.

David - I'd love to be able to produce a high quality CD package. Unfortunately CD sales for Chapita were very poor and I've had to limit my financial exposure.

hi Matt-
Thanks, totally understand and sorry to hear the cd sales were poor on chapita. People are missing out, it's a killer no filler record. Also would love to get this on lp as i know it's beautifully done but at $54 USD it's kind of out of my budget. I love all things matsuli and try to support your efforts so have gone ahead and bought the downloads but am feeling the sting of the pricing of this one. Curious why this is priced as such a collectible when the idea is to get the music out to a new audience? Also what does the cdr come with?

David-
Thank you for the feedback. I'm balancing getting the music out there (via Spotify, TuneCore Player and iTunes/Amazon/eMusic) with a vinyl collectible for those that cannot afford to pay the circa $1500 the original LP is commanding. I'm sorry that a nice CD package is not feasible. The Amazon CDR has the cover art and CD - no liner notes. Matt

hey matt,
Thanks for your comment. I do truly appreciate what your doing with the monumental task of reissuing this work. I know it's a labor of love and it shows. Only wish that this was at a lower price point so it was comparable to similar vinyl releases from honest jons, etc.
Hopefully the future releases will address this or perhaps there's some middle ground.
Much respect,
David

Hi Matt - you got a play on the excellent Colin Greenwood in South Africa BBC Radio 6 (part 2) program - at about 25min24sec: