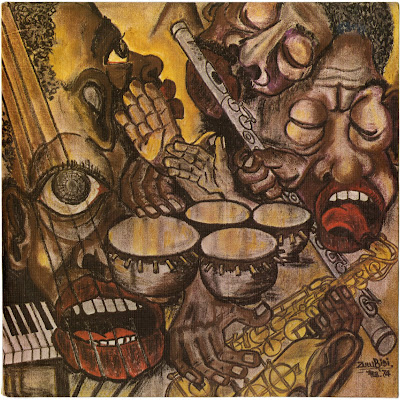 One of the key spiritual jazz LPs in the canon of South African jazz will be reissued by Matsuli Music later this year. Initially I was unable to locate the master tapes and the recording was restored from a clean vinyl pressing. But the master tapes have now been located and I will be travelling to South African later this month to collect them and to speak to remaining members of the group. Tracks from the 1974 debut have appeared previously on the Comet Records compilation Ouelele as well as on the Strut Records compilation Next Stop Soweto. I have previously written about them here.

The recording will be available as a limited edition 180g vinyl release as well as MP3 and FLAC digital editions. If the research goes well then I expect that the release will be available for purchase from 1 November 2011.


The excerpts above come from a BBC documentary and feature Batsumi's bass player Zulu Bidi.

NOTE TO BUYERS: The matsuli store will be closed during the period 27 July - 18 August
at 8:01 PM

Super-excited...I fell in love with Batsumi the minute I first heard them through you. Can't wait for pre-orders!