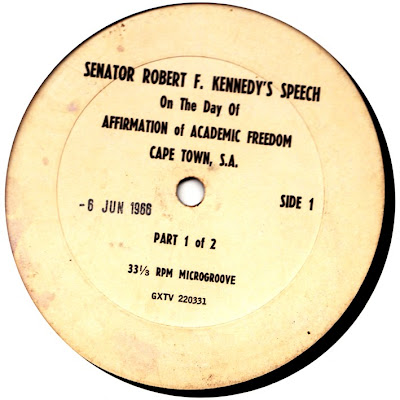 This record turned up in a recent dig by our good friend Chris. The first time I heard about Kennedy's visit to South Africa I was sitting in an visa consultants' office talking about student politics. He told me that he had been on the NUSAS organising committee for the Johannesburg sector of the Kennedy tour. Anyway it an interesting oddity and surprising that it made it onto LP. In doing some background research I discovered that the transcript is available on the net which saved me some time. Check it out.

After the assassination of President Kennedy, Robert Kennedy undertook a 1966 tour of South Africa in which he championed the cause of the anti-Apartheid movement. The tour was greeted with international praise at a time when few politicians dared to entangle themselves in the politics of South Africa. Kennedy spoke out against the oppression of the native population and was welcomed by the black population as though a visiting head of state. In an interview with Look Magazine he had this to say:
“ At the University of Natal in Durban, I was told the church to which most of the white population belongs teaches apartheid as a moral necessity. A questioner declared that few churches allow black Africans to pray with the white because the Bible says that is the way it should be, because God created Negroes to serve. 'But suppose God is black', I replied. 'What if we go to Heaven and we, all our lives, have treated the Negro as an inferior, and God is there, and we look up and He is not white? What then is our response?' There was no answer. Only silence. ”
In South Africa, a group of foreign press representatives chartered an aircraft, after the National Union of South African Students failed to make sufficient travel arrangements. Kennedy not only accommodated a suspected Special Branch policeman on board, but took with good grace the discovery that the aircraft had once belonged to Fidel Castro. [from WIKI)

Man, what a memory! I was there on the stage behind RFK when he made his famous Academic Freedom lecture. I was there as the chairperson of the Stellenbosch local committee of NUSAS. That was indeed a night to remember.
Thanks for this post.

It seems that the download link for this record is missing. Please, re-up this rare Bobby Kennedy record...