Ancient to the future 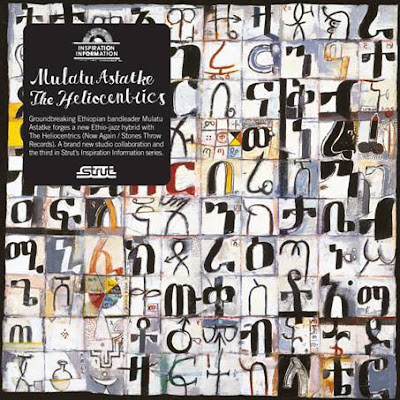 Soon via STRUT and lined up for release after the Horace Andy/Ashley Beedle collaboration. Check out this interview with Mulatu taken from the time when he was recording the LP with the Heliocentrics.


The initial PR for the LP goes something like this: "The original Ethio-jazz legend enters the fray. The Ethiopiques album series has steadily gathered steam in recent years, culminating in two huge shows during June 2008 at Barbican and Glastonbury. Raiding the archives of small studios and radio stations in Addis Ababa from the ‘70s, the series has been a revelation, unearthing a true fusion of funk, soul and jazz with five- tone Ethiopian scales and traditional instrumentation and vocals. The ringleader of those recordings, vibesman and percussionist Mulatu Astatke, now embarks on his first studio album for over 20 years. The collaboration follows a sell-out gig at Cargo and a Gilles Peterson Maida Vale session earlier this year with The Heliocentrics (Stones Throw Records). Responsible for backing DJ Shadow, laying down beats for Madlib and Yesterday’s New Quintet and for fusing influences as diverse as Sun Ra, Axelrod, James Brown and Morricone on their debut album, the Helios, led by drummer Malcolm Catto and bassist Jake Ferguson, have fast become a unique powerhouse of free-thinking beatsmithery. At Cargo in London, they backed Mulatu on a full set of his Ethiopiques classics, brought together and presented by Karen P’s Broadcasting and Red Bull. Since then, the process around the new recordings has been in full flow with Mulatu now back in Addis Ababa armed with a Heliocentrics CD of groove ideas and riffs. As well as writing his own vibes and keyboard parts, Mulatu is using the project to build in some of the stunning indigenous sounds from Ethiopia, inviting tribespeople to record local instruments and vocal parts for the sessions. “I have always wanted to involve Ethiopian cultural instruments in Ethio-jazz, playing Western 12-tone music,” explains Mulatu. “We’ll be experimenting – the musicians in The Heliocentrics are so great and I think we will make a wonderful album.” The project culminates in a full recording week at Heliocentrics studio in London during the first week of September 2008 and a full live tour during Spring 2009"
at 1:01 AM

i didn't know he was still around making music. Nice 1 Mulata!