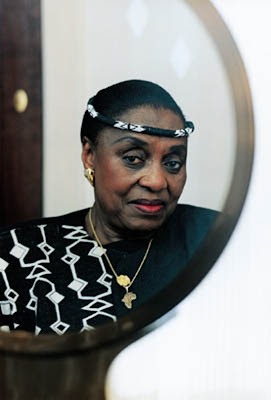 She died overnight after taking part in a concert for Roberto Saviano, a writer threatened with death by the Mafia, the Italian agency said.

Miriam Makeba, known as "Mama Africa", was the legendary voice of the African continent who became a symbol of the fight against apartheid in her home country.

She died just after having sung for half an hour for the young author of "Gomorrah" at Castel Volturno near Naples along with other singers and artistes.

She was taken ill and was quickly taken to a clinic in Castel Volturno where she died of a heart attack, ANSA said.

Miriam Makeba was born in Johannesburg on March 4, 1932. She made an international farewell tour in 2005.

Born from a Swazi mother and Xhosa father, Makeba captured international attention as vocalist for the South African group, The Manhattan Brothers, while they toured the United States in 1959.

The following year, when she wanted to return home to bury her mother, the apartheid state revoked her citizenship and later also banned her music. As a result she spent 31 years in exile, living in the United States and later in Guinea.

She became the first black African woman to receive a Grammy Award which she shared with folk singer Harry Belafonte in 1965.

Two years later her fame sky-rocketed with the recording of the all-time hit "Pata Pata" (Xhosa for "touch, touch" describing a township dance) although she unknowingly signed away all royalties on the song.

She hit an all-time low in 1985 when her only daughter, Bongi, died aged 36 from complications from a miscarriage. Makeba did not have money to buy a coffin for Bongi, and buried her alone barring a handful of journalists covering the funeral.

But she picked herself up again, as she did many times before, like when her father died at a young age, or when she recovered from cervix cancer, or her many unhappy relationships, or unfounded rumours of alcoholism, according to her biography.

She returned to South Africa in the 1990s after Mandela was released from prison but it took a cash-strapped Makeba six years to find someone in the local recording industry to produce a record with her.

She since released "Homeland" which contains a song describing her joy to be back home after the many years in exile in which she spoke out against apartheid and testified twice before the United Nations.

"I kept my culture. I kept the music of my roots. Through my music I became this voice and image of Africa and the people without even realising," she said in her biography. 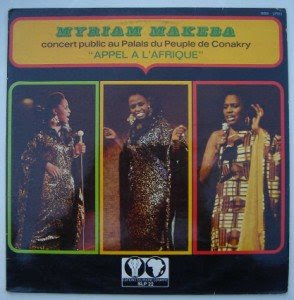 Shared with you today is my all-time favourite song from Miriam, Djuiginira available on the incomparable Sterns collection The Guinea Years. Its worth dropping by the worldserviceNL blog to pick up an unmixed copy of one of her best late period LPs Sangoma. Also check out the LP Welele. As for other recommendations I suggest checking out Country Girl and the African Convention LPs from the '70s.
at 6:47 AM

Hamba Kahle Mama,you walked tall, far and wide and now even passed on in foreign lands,but your heart was and will be at the center of our beloved continent.The revolution won't be televised,but your songs will keep teaching.Aluta Continua Samboerou

thank you for this and all other posts.

some of you might be interested in this Afro-Asian Dubstep album which fuses global traditional music with modern bass and beats:

question: if some or all of the material made available on this site are out of print and commercially unavailable, why the reluctance to make the downloads available for longer periods of time?

i'm kind of dying to hear these:

bigup and keep up the great work!

I am so saddened to hear this tragic news. From young songbird, to flegling vocalist, to grand dame of African music.. Miriam was a true legend and a credit to Africa as a whole. Her beautiful songs have taught and inspired and they will keep on doing so though she isn't here to sing them for us anymore. Sobonana ezulwini, Mama Afrika.

I recently came accross your blog and have been reading along. I thought I would leave my first comment. I dont know what to say except that I have enjoyed reading. Nice blog. I will keep visiting this blog very often.