Bring back all those colours to my dreams 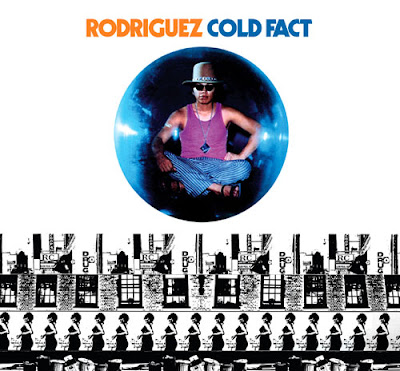 A classic LP that sold in vast quantities in Southern African and Australasia but that sank without notice in the States, Europe and the UK. Originally released in 1971 no self respecting record collector would be without a copy of this LP. By the the time television finally arrived in South Africa and sitting around the radio or listening to LPs was consigned to the past I could recite just about every song on this LP.

Here's Andrew Bond setting the scene: South Africa was a very different place in 1971 when Cold Fact was modestly unleashed on the Southern hemisphere. Back then, nobody had heard of Rodriguez. Abba was storming the charts, TV hadn’t arrived (god forbid, it was too corruptive according to the dominees) and our current President was in jail. Music was played on turn-tables, Cliff Richard was on tour and the Hippie era hadn’t quite made it South. Violence and crime was something that happened in the townships, South African musicians were gaining modest international success and Sundays were spent at church.

"Sugar man, won’t you hurry ‘cos I’m tired of these scenes."

Against this backdrop, an album with lyrics such as these must’ve seemed years ahead of it’s time and could only have captured the imaginations of a lost generation of South Africans. Over the next twenty five years, waves of disco, punk, new-wave, grunge and electronic music (in addition to our own ethnic music) served as soundtrack to the country’s turbulent history. Yet through it all an astonishingly simple folk album from a hitherto unknown singer crept into the hearts of many, occupying a unique place unparalleled elsewhere in the vast world of music.

There's more background information at the Seattle-based (thanks for the correction Doug) label Light in the Attic's site. They have just remastered the original tapes and put it out in digipak and vinyl. Well worth checking out. A free mp3 comes courtesy of them:
Sugarman - FREE DOWNLOAD

Whilst I've been busy at work after the summer holidays I haven't been as active in getting music and news up on this site. I hope that like me you have discovered the following new blogs: Worldservice and Global Groove. Plenty of treasures in store for you there. Aduna has also been active with some incredible stuff recently.

And as if that isn't enough John Beadle over at Likembe has put up his selections from the African Serenades series that I co-ordinated some time back.

An exciting project of mine that I'm working on with Chris A is likely to reach fruition in the next few months. More about that soon. In the meantime enjoy the man Rodriguez. For more on the hunt to find him look here.
at 1:45 PM

A minor correction, Light in the Attic Records is not a Canadian label (as far as I know) but is based right in my hometown of Seattle.

More on Rodriguez... there is a nice story by Joel Rose on the NPR Music website:
http://www.npr.org/templates/story/story.php?storyId=94076306

Don`t know why it didnt get popular USA Europe...I really enjoyed it.:-/

I've still got the vinyl. Some of those songs can still send a chill down my spine. AMG had him pegged in two lines as a cut-price Boby Dylan. The story of his "re-discovery" http://www.sugarman.org/musicafrica.html.