Its a long way from Harlem to Soweto 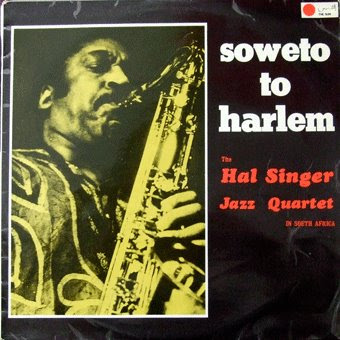 I first heard Hal Singer via his collaboration with Manu Dibango on the lovely laid-back track "Soukouss". Recently I picked up the Kindred Spirits reissue of his sought after 1974 LP Soul of Africa. Whilst in Johannesburg at the collectors market in Rosebank I came across a bashed up copy of the LP that I'm sharing with you today. It was a surprise to me that he visited South Africa and recorded not one but two albums for Rashid Valli's As Shams label. The blues and jazz pieces from the LP I'm posting today are great but its the second LP recorded a year later that I really want to hear as Hal makes use of the seminal South African jazzmen of the 70s. Enjoy it while it lasts and please get in touch if you have the second LP.

Thanks for posting, Matt. I'm looking forward to hearing as i really love Soul of Africa reissue. It's the only thing i've ever heard by Hal Singer so this is a real treat. I wonder if Hal ever played with any of the Blue Notes?

I'm pretty sure that he never played with the Blue Notes on any recorded session. But then who knows what may be unearthed?

am i too late for this :( is there any possibility please

Hi to a fellow South African, as someone who was around in 1976 in Cape Town and Joburg, spending lots of time with Dollar Brand, Bheki Mseleku, Spirits Rejoice, Eugene Skeef, Peter Sagona, Thandie Klaasen, Allan Kwela - I am sure names you will recognise. It is great to see that your amazing blog championing good and varied African music - I am looking in particular for a Hugh Masekela Lp - "Home is Where The music is At" featuring Larry Willis and Eddie Gomez. Meant a lot to me whilst in Exile in London. Also Phillip Tabani's or Alan Kwela's recordings. Is it possible you could reload the Hal Singer, did he play at the Market Place in 1976.

Hi, I'm trying to download 'Soweto to Harlem' by Hal Singer, but getting an error saying that the file isn't available and that I need to contact the uploader who may need to upload it again. Hope that's possible.

I'm sorry people but this one has long gone...

Any chance of uploading this again? I've just received information that Hal is alive and well living in Paris - although he has serious eyesight issues, he still plays occasionally ... N

Nou, I'm sorry but for copyright reasons and a commercial agreement with the owner of this material I am not longer able to provide the music.