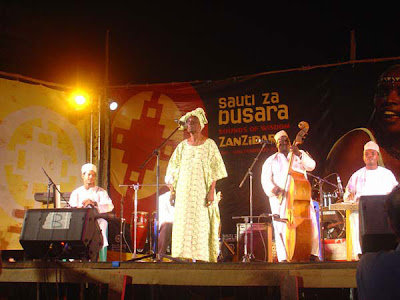 The pictures I took on a visit to Zanzibar in late 1994 are deceptive - the camera appears to work very hard at protecting a romantic image of Zanzibar. Missing are the cows grazing on the rubbish dump, the delapidated remnants of East German architecture, the disused funfair, the scuba tourists and the mangey cats.

Whilst staying in Stonetown we enquired endlessly about taraab ensembles but I don't think we tried hard enough and clearly no-one had "commercialised" this need back then. When finally a message was passed to us that an ensemble was appearing it was too late.

But things have changed. These days its worth organising your trip for February when the Sauti za Busara (Sounds of Wisdom) festival takes place. And if you don't travel to Zanzibar but are still interested then you should pick up the following Festival highlights CD/DVD package:

This features musical treats from the festival and is presented by the festival’s founder Yusuf Mahmoud (aka DJ Yusuf). The CD features 13 tracks from artists that have previously performed at the festival, whilst the DVD, produced by Head of Fourth World Dennis Tapfuma, international filmmaker Tamara Gordon and film editor Tomas Brickhil, visually encompasses the broad spectrum of Sauti za Busara and brings to life the musical diversity and culture experienced.

Yusuf Mahmoud, director of Busara Promotions (who organise the festival) first arrived in Zanzibar from the United Kingdom in 1998 to help organise the first edition of Zanzibar International Film Festival (ZIFF). This later evolved into the annual Festival of the Dhow Countries, taking place in Zanzibar around the beginning of July each year. Whilst spending five years organising the music and performing arts programme of ZIFF, he realised that there was room on the island for another annual festival, and the need for an event which would focus in particular on showcasing the broad spectrum of music that is created in East Africa. Hence the birth of Sauti za Busara.
at 10:53 PM