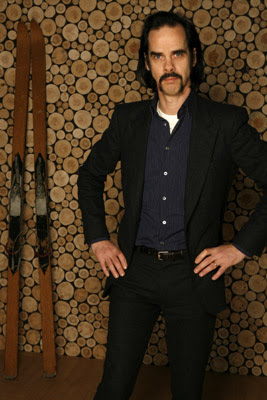 Something to look forward to in 2008 (aside from the Soundway Nigeria releases...more about them soon!) is the new Nick Cave and the Bad Seeds LP Dig Lazarus Dig!

Here's the hype from nickcaveandthebadseeds.com:
The first single from the album DIG, LAZARUS, DIG!!!- and the album’s title track - DIG, LAZARUS, DIG!!! - is released on February 18th 2008. It will be available as a limited edition 7”, CD and download. The B-side features another new Nick Cave & The Bad Seeds song Accidents Will Happen.

"Ever since I can remember hearing the Lazarus story, when I was a kid, you know, back in church, I was disturbed and worried by it. Traumatized, actually. We are all, of course, in awe of the greatest of Christ's miracles - raising a man from the dead - but I couldn't help but wonder how Lazarus felt about it. As a child it gave me the creeps, to be honest. I've taken Lazarus and stuck him in New York City, in order to give the song, a hip, contemporary feel. I was also thinking about Harry Houdini who spent a lot of his life trying to debunk the spiritualists who were cashing in on the bereaved. He believed there was nothing going on beyond the grave. He was the second greatest escapologist, Harry was, Lazarus, of course, being the greatest. I wanted to create a kind of vehicle, a medium, for Houdini to speak to us if he so desires, you know, from beyond the grave. Sometimes, late at night, if you listen to the song hard enough, you can hear his voice and the sad clanking of his chains. "I don't know what it is but there is definitely something going on upstairs", he seems to be saying. It is, most of all, an elegy to the New York City of the 70's." - Nick Cave

A radio rip of the song is doing the rounds. You can download it HERE
at 3:42 PM

I've always been a big Nick Cave fan myself... missing the Grinderman shows last summer by a few days was a real bummer. To make things even worse, my friend Jim who plays drums in the band had offered to put me on the guestlist for the sold out London show (together with Suicide who played their first show with their original instruments from the 70s). Going to see bands is probably the only thing I miss down here...