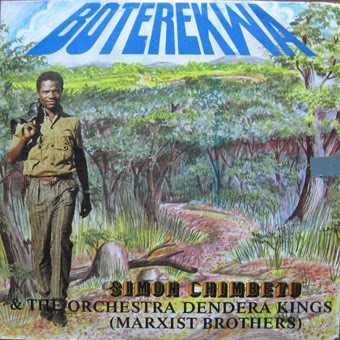 I googled "The Marxist Brothers" to try and get more information on the today's LP and I came up with the following lyrics written by NOFX:
"The Marxist Brothers"
We meet in underground parking lots
And late night in coffee shops
With voices low unless we’re drunk
We've got hats and cop sunglasses
We question all that is wrong
We discuss conspiracy
Are we enemies of the state?
Or idealist bourgeoisie?

I’ll get this one, put it on my card
I get frequent flyer mileage
And a booklet of upgrades
So next time I visit the third world
I won’t have to fly second class
The people's revolution is gonna be a podcast

We took the bus to the anarchist book fair
I left the hybrid at home
I scored an extremely rare signed copy of the communist manifesto
We protested the G8, got maced by female police
In hot black uniforms and boots
I got one’s e-mail address

Now that you're smiling here's the real reason for today's post: DavidN from the AfricanAmbiance discussion board has contributed to the Matsuli site with an upload of another Zimbabwean classic. This time is the band formerly known as The Marxist Brothers, namely Simon Chimbetu & Orchestra Dendera Kings. I got this LP in Harare during the printing shortages of 1989 and didn't get the lovely cover David has provided for us today. The style is Zimbabwean rumba with longer songs almost in a nod to the Congolese tradition. Cracking stuff and highly recommended.
Heres the tracklisting:
1. USANDISIYE
2. FUTURE
3. MUSORO WACHENA
4. PAKATI PEGUNGWA
5. ONE WAY
6. BVUMA MUKWASHA

And here's some background on SImon Chimbetu from the Zimbabwean Music Guide:
Simon Chimbetu (1955-2005) was one of the many Zimbabwean musicians who found their footing in bands before heading out to pursue solo careers. Chimbetu first found success in the Marxist Brothers. Formed by Simon with his brothers Naison, Brian, and Allan, the band had a string of hits during the 1980s and early 1990s. Despite backing Simon on his first solo effort, Karikoga, The Marxist Brothers eventually dissolved in the mid-90s as the members left to pursue their own careers, while others joined Simon’s backing band, Dendera Kings. This set the stage for Simon to assume the position of one of Zimbabwe’s premier rhumba artists. Taking the torch from acts such as Jonah Moyo, Chimbetu hit stardom with albums such as Survival, and Lullaby. Compared to most Zim rhumba, Simon’s songs feature guitar solos sandwiched between prominent vocal lines and repetitive guitar riffs. His music was similar to that of his earlier band, the Marxist Brothers, as well as popular rhumba musician Leonard Zhakata. His songs tended to focus on the working class and the poor; unsurprisingly, Chimbetu came out in support of the recent land grab.

Thanks so much for this! This is one of the most exciting records I've heard recently. Wonderful guitar playing!

this sounds great! another great sounding post, from afar (the skafunkrastapunk forum), looks quite interesting. haven't heard these sides yet, but here are the details... major kudos to forum member "op" for this contribution to the abovementioned forum! Naturally, I trust that he would not mind the links being posted here, at this mighty fine blog...

"A whole bunch (32 total, 700 MB) of African singles from the 70's, pressed in Kenya, but from all over Africa. These are my vinyl rips, some of the pressings are noisy.
I've uploaded these in two large zips."

The African singles collections look great, but there seem to be problems with the file extensions.

I can get neither part one or the label scans to open...

Me too - downloaded alright, but when I go to extract them it comes up with the same error message... boo hooo

I had no issue with the following links:

3. These are my vinyl rips, some of the pressings are noisy.

I hope these work. If not I'll reload them
Matt

"Exceeded my download limit", so will try again tonight or tomorrow..

As far as I can see, the problem with the file extensions is that there are backslashes rather than forward slashes. . .WinZip can extract them but it gives you a fault message that you click on OK first. As there are two score files in each package this is a little tedious but if you get through it the files will extract, at least they did for me. . .

That's helpful and it does work.

No password needed when i unzipped them.
Had to use Winzip, not Winrar though.
Rob

thanks for dropping the links here.

I had already sent Matt the links privately, so I figured they would be here.

jahspear, I am on a mac,and the zips are not pass protected, so I imagine your problems are with the way the files are titled.


People with pc's at SFRP said the following:

Has something to do with differences in MAC or WIN namegiving. All filenames of the tracks have " (from 7") in it and that isn't allowed in windows (no problem with Mac).
WinZip can't show the names when unpacking and says the file is bad...

on my pc, using winrar, i was able to unpack the original dl - but only if chosing 'extract files' in the right-click context menu - then select 'keep broken files' (don't know if this is really necessary) and in the advanced tab 'do not extract paths'

Hope this helps. I'll try to avoid unalphanumeric characters from now on...

Thanks op, downloaded winrar and although it produced loads of errors it did the trick. Just listening now, very sweet indeed. Thanks again.

Thanks for the Chimbetu album. I had the joy of seeing him live a few times in Harare, around 2002. A great performer, and a sad loss when he died in 2005.

Unfortunately the link of Megaupload are for accounts premium.
Is there any option for rapidshare?

These African singles are a major gift! Thanks to op for all the work — and I know it's not as easy as it seems when you start out with a project like this. It gets tedious.

But keeping the music alive is a great calling. My profound gratitude.

..just arrived here via a link on ebay of a record i'm interested in! ... plenty of amazing stuff here - time to have a wee look around methinks! .. cheers for all your hard work!
...& Op! many thanks as always for your wonderous efforts (maybe i should head back to SFRP - i've not been there for maybe a year now!)
...& make sure y'all check out the African section of my blog!!
http://ylow.blogspot.com/search/label/world%20%28africa%29
... plenty more to rip & post!
cheers & have a good one!
peace
MrC ;)
http://ylow.blogspot.com/

blimey ... this limited DL is a wee bit o' a bugger! looks like i've missed out on plenty of unobtainable treats

nevermind
cheers for what leftovers i did grab .. & i look forward to your future postings

but wanted to say awesome collection of Kenyan pressed 7"s - some real gems - thanks for re-sharing!

guys wants to earn a rapidshare account legally and in very fast way?
i got my account in less a month for using this paid site. they pay u up to 7 $ per click. and when u register u can make straight away 27 $ so hurry up and register if u want ur rapidshare account :) here is the link :