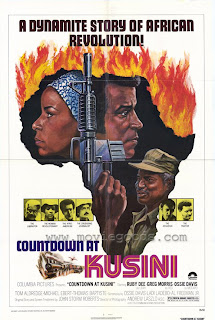 With a story written by Original Music's John Storm Roberts and starring Ruby Dee, Ossie Davis and Greg Morris amongst others the music for this 1976 Blaxpoitation film was composed and performed by Manu Dibango. "This rare soundtrack was produced in tiny quantities for the premiere of the obscure Ossie Davis movie in Seattle in August 1975. Each album is individually numbered, and signed by the cast. It's a superb blend of African rhythms, jazz, and a heavy dose of space jazz and funk. There are too many good tracks to mention, from uptempo dancefloor cuts to slower mellow numbers, all featuring Manu's superb sax playing." Blaxloitation.com

waoh the big Manu hits again !! beautiful soundtrack ! deeeeep and groooovy !
thanks for the discovery / benoit

interesting! i had heard about this movie in the past, particularly about it being financed by the Delta Sigma Theta sorority(!) but for some reason, i always confused it with Kongi's Harvest, the previous movie Ossie Davis directed in Nigeria.

but i had no idea that it was written by John Storm Roberts, of all people!

the music is great... thanks!

Thanks a lot! Superb!

By the way: soon to be released on Otrabanda Records:
"BOKOOR BEATS, - Vintage afro-beat, afro-rock and electric highlife from Ghana (OTB08)"

Oh man...you hit me hard with this one! Found you via B&F, always enjoy your stuff, but this...fantastic!

real nice. thanks for this soundtrack. excellent blog.

What a great soundtrack! If you don't mind, I'd like to re-post in my own blog as well. Come visiting me at http://babeblogue.blogspot.com/

Hi Matsuli, was directed to your outstanding blog by Radu. I've also included a link here in a post of Manu's discography I just put up:

Thanks for making this one available to the blogosphere!