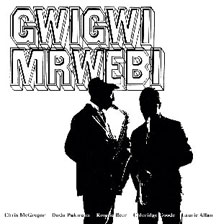 Hot on the heels of Numero for label of the year is Honest Jons. Following on from their excellent London is the Place for Me series is the first in a sister series of individual artist releases.

And so the original cry for recognition of this record has been heard...
Reissue this! AFRO 101
The original Dobell's jazz record shop was at the bottom end of Charing Cross Road in the West End of London. I say original, but there may have been another one before 1974, which was when I moved to London. In any case, the place certainly felt like it had been there for years, with a great selection of second-hand records in a pleasingly cluttered basement. The listening booths upstairs were like the ones in Sydney Tafler's music shop in the movie "It Always Rains on Sunday" except that Dobell's booths had graffiti that read "Bird Lives!" and "Coltrane is God!" and you hardly ever saw pencil-moustached bandleaders kissing young ladies in them. Instead you could take an armful of old LPs from downstairs in and ruin them with massive bakelite pickups.
A while before that, Mr. Dobell had started a record company called 77 Records after the street number of the shop. I'm pretty sure that I read somewhere that Bob Dylan's first recording, an anthology released when he was still calling himself Blind Boy Grunt, was on 77. What I am sure of is that 77 Records Afro 101 was called Kwela by Gwigwi's Band and it featured Gwigwi Mrwebi and Dudu Pukwana on alto saxophones, Ronnie Beer on tenor saxophone, Chris McGregor on piano, Coleridge Goode on bass and Laurie Allan on drums. Dudu and Chris moved to London in 1965 and I am guessing that this LP was made soon after that.
Each piece they play is either by Mrwebi or Pukwana and one or other altoist solos on every tune, sometimes with a piano solo too. They're very short versions, as though recorded for a series of 7-inch singles, and the tunes are wonderful, all in the Kwela dance style that was then captivating South Africa. The terseness of the treatment is in nice contrast to the generosity of the melodies. Some of Dudu's tunes that first appeared on this album were recycled later when McGregor formed the big band The Brotherhood of Breath, but others never seemed to get played again. I arranged the opener, Dudu's "Good News", for our South African tribute band The Dedication Orchestra and dedicated my arrangement to the late Mike Hart, who had given me a cassette copy of his copy of Afro 101. Mike was a Glaswegian who had worked for years in Compendium Books in Camden Town. Anything you needed to know about books or music, Mike could tell you: best new thriller? bio of Lester Young? hot new cartoonist? Writer and musician Ivor Cutler popped in there frequently and dedicated a volume to Mike, one of the tiny books of Ivor's minute poems they always kept on the front counter at Compendium.
Both Dobell's and Compendium are gone now and I fantasise about a new system of commemorative plaques. Blue plaques are normally put on London buildings once occupied by famous people, but my idea is plaques for the great lost shops of London and the people who, with love and dedication, worked in them. I'll also always miss The Albanian Shop in Betterton Street and Wong, Singh, Jones in Portobello.
Reissuing Kwela by Gwigwi's Band would be a pretty sensible way of remembering departed players like Dudu and Chris, and I'm sure the guys who are still very much with us - like Coleridge and Laurie - would rather see it out than impossible-to-find. I have a chum who thinks he can put his hand on the master tapes. What could they be like after all these years? Have they crumbled into dust? Is there hideous print-through? Probably not - my guess is that magnetic tapes survive better than CDs. We recently went back to cassette masters from twenty-five years ago and they were in perfect nick. — Steve Beresford

From the Honest Jons release notes:
Gwigwi Mrwebi travelled to London from Johannesburg in 1960, to appear in the musical King Kong - alongside the likes of Dorothy Masuka, featured on London 4. (Back home earlier that year he'd recorded alongside Hugh Masekela and Kippie Moeketsi in the Jazz Dazzlers; and earlier he'd played with the Jazz Maniacs and the Harlem Swingsters.)

The Blue Notes came after him in 1965, and two years later Chris McGregor, Dudu Pukwana and Ronnie Beer joined Gwigwi for this session at Dennis Duerden's Transcription centre in Covent Garden, together with Jamaican bassist Coleridge Goode (from Joe Harriott's group), and on drums the Welshman Laurie Allan ( a Blue Notes regular, who played with Gong in the seventies). Mbaqanga Songs is a reissue of the LP which resulted (originally entitled Kwela by Gwigwi's Band, and impossible to find pretty much ever since).

I am just listening to the London is the Place n°3 and it's a bomb !! what a great records ! exciting ! deep ! shaky ! musically rich !
Those Honest Jon's guys rocks !

Also I have checked the first compilations from the Numero Label that are focused on Soul music and once again they are the ones that clear fields on land we have never heard of.

definitely the kind of people whom works deserve a blind acquisition !

"I'm pretty sure that I read somewhere that Bob Dylan's first recording, an anthology released when he was still calling himself Blind Boy Grunt, was on 77"

That's dead right. It's an album by Eric Von Schmidt and Dick Farina, two Americans passing through London at the time, in the bad winter of 62/63. Dylan plays harmonica and does some background singing on a few tracks. He was under contract to Columbia Records - his first eponymous LP had just come out - so he used that pseudonym.

It's not that great an album, but has never been reissued on CD. I think the copy I've got has an insert listing all 77 label releases. I'll check.

Please, resume. I've found it only today.
Thanks
Andrea