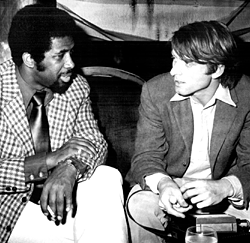 From the Sound of the World forum where someone was protesting that I was a bootlegger:
The Matsuli site is a fantastic resource that can lead visitors into exploring music they may have heard of, but never actually heard. They can decide for themselves whether to buy bona fide compilations or the pirates. Even where the albums are bona fide, royalties may never flow back to the original artists or their descendants because so many records were made on a session fee basis.

There are plenty or precedents where unauthorised albums have served to show demand for music that the original owners have been oblivious to. The famous Harry Smith collection of old blues and country music was basically a bootleg at the time. Fifty years later, the people at Smithsonian found ways to pay royalties on their reissued version.

Matt
For sure if some one listens to and is exposed to African music, chances are they would want to buy it after some time.

For folks like me, this is a Godsend. While I would like to buy African music, its just not easy to get in the US!

What is needed is more offerings at 99c/tract for down loads of difficult toget music esp like the NICO vol 31!

Just added a riposte to Joe Meek's comments in the Gillett thread that you might care to read.

I, for one, am very grateful to have discovered this blog and the amazing music it contains. Since I am useless with technology, however, I find the podcast format less handy than the upload/download system you used to deploy as I don't seem to be able to burn recent offerings such as African Serenades 30 and 31 to disk, which is a pain as I should be able to listen to this stuff on a Walkman - old technology! - while I am walking around in the summer sunshine...

what was your response to the "warning" matt? seems to me your publication of personal research for the good of all is not something to get pernickity about at this level... you deserve encouragement for making the time to share this excellent stuff.