Spirits to Bite Our Ears I first heard of Thomas Mapfumo in "None but ourselves: Masses vs. media in the making of Zimbabwe, by Julie Frederikse (Ravan Press 1982)". This stirred my interest and when later that year I got hold of the Hokoyo and Gwindingwe Rine Shumba LPs from a trip to the recently liberated Zimbabwe I was astounded by what I heard. At around the same time a friend of mine in London filmed some of his first concerts in the UK for his college film-making project. This was around the time of the label Earthworks signing him. 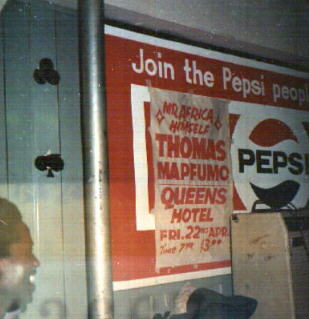 I first saw Thomas Mapfumo play with the Blacks Unlimited at Queens Hotel in 1984. Then over the rest of the decade I saw him play a number of times again in Zimbabwe and London. I remember so clearly a time in 1986 when he was in London to promote the reggae LP Chimurenga For Justice and he was staying next door with a friend in Brixton. I spend a wonderful afternoon making Gregory Isaacs tapes for him and sharing our experiences and enjoyment for music.

I have a provided a download of a track taken from the soundboard at the Town and Country Club, Kentish Town, London for you to listen to. MAPFUMO LIVE IN LONDON 1986

Later in the 1990s when he was due to play in South Africa he was arrested for possession of dope and had to make a quick exit. I don't think he was ever had the chance to play in South Africa and now-days is settled in self-imposed exile in the USA. The dreads have gone and the Blacks Unlimited have lost so many of their original members from AIDs-related illnesses.

He continues to perform, record and make a difference.

Fully endorsed by Thomas Mapfumo this recently released CD collects all of the primary singles from the period 1977-1986. Song explanations come from Banning Eyre. (My only gripe is the over-use of colour-half toning on the photographs in the booklet.)

Highly recommended.
at 9:50 AM

Welcome, congratulations and long life to this new blog about African's music.

Thomas Mapfumo did play in South Africa. I saw him and his full band play at the Tandoor in Rockey Street, Yeoville, JHBG. It must have been around 1990/91.

Chris-
He was booked for a week-long show at Tandoor and a countrywide tour. He was unfortunately arrested in Yeoville whilst scoring and sent back to Zimbabwe. At the time I spoke to Simon Davis about the shows and wasn't sure that he'd actually performed before being sent back. Thanks for the correction.
Matt